It's Not A Joke 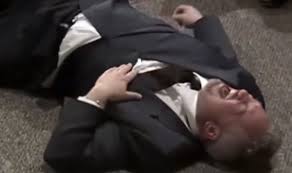 "Have you been baptized in the Holy Spirit?" This is no longer a question asked only by Protestant Pentecostal ministers. You will hear it spoken by members of the Vatican II sect involved in the Catholic (sic) Charismatic Movement (hereinafter CCM). When Vatican II's "new springtime" of apostasy came in, so did every form of moral and doctrinal aberration.  This CCM is found in nearly every diocese of the Vatican II sect, including the Archdiocese of New York. According to "Fr" Harold Cohen, SJ of the Archdiocese Catholic (sic) Charismatic Renewal, " What can we expect when we are 'baptized with the Holy Spirit'? We can expect an immediate or gradual experience of deeper union with God, our loving Father and with Jesus, our Lord and Friend; a fresh appreciation of Scripture; a greater love for others and a desire for Christian fellowship; the fuller presence in our lives of the fruit of the Spirit: love, joy, peace, patience and
more (see Galatians 5:22-23); the receptions of one or more of the Charismatic gifts of the Spirit such as discernment, service, prophecy, praying in tongues, healing (see 1 Corinthians 12-14). This gift of a new fullness of the Holy Spirit is, I believe, the grace of our age. "Ask and it will be given to you!" (See http://www.catholiccharismaticny.org/baptism-in-holy-spirit).

What is this "eighth sacrament" being peddled by the CCM? Can the people who receive it pray in tongues, heal themselves and others; even become prophets? The origins and evils of the CCM will be exposed in this post.

The CCM can trace its origin to the Pentecostal sect of the 19th century. According to William Whalen's book, Minority Religions in America, "The reappearance of glossolaly (speaking in tongues) was reported in 1901. Charles F. Parham, a Holiness preacher, was dismayed by the aridity of his own spiritual life. He rented a white elephant mansion in Topeka, Kansas, and started a Bible school with about 40 students. Together they set out on an intensive study of scriptures and came to the conclusion that speaking in tongues was the one sign that a Christian had received the baptism of the Holy Spirit. At 7 p.m., on New Year’s Eve in 1900, one of the students, Miss Agnes N. Ozmen, startled the assembled group when she began to pray in tongues. Within a few days, many more followed suit. Parham spent the next five years as an itinerant preacher before opening another Bible school, this time in Houston. One of his students, a negro minister named W.J. Seymore, carried the 'full-gospel' message to Los Angeles. A three-year-long revival in that California city attracted people from all over the country, and these people planted Pentecostalism in most of the major cities in the US, as well as in many European nations. The old Holiness churches refused to give emphasis to tongue-speaking, but dozens of independent Pentecostal Churches were soon organized." (Staten Island: Alba House, 1971, pg. 179).

In 1967, during the nascent Vatican II sect turmoil of ecumenical frenzy and near universal apostasy, students at Pittsburgh’s Duquesne University began exposing themselves to Pentecostal influences because of "spiritual aridity." They were envious of the "changed lives" among many Protestant friends and decided to pray for similar "graces." A weekend "retreat"gave them what they wanted. Various people approached Protestant ministers, laity, and prayer groups. All received "Baptism in the Spirit" after having heretical hands laid on them in prayer.

The importance of this action cannot be overestimated. These former Catholics of the new Vatican II sect submitted themselves to a non-Catholic pseudo-sacramental rite (a mockery of Confirmation) and the emotional thrill brought about by this sin convinced them of the holiness of the entire experience. They came away as "Catholic" Charismatics, and their influence spread quickly throughout the Vatican II sect. The CCM fits in perfectly with the ecumenism of Vatican II. If these "gifts" of the Holy Ghost (allegedly speaking in tongues, "healings," etc.) are true in the "Catholic" Church and they also happen in various Protestant denominations, then it stands to reason that there are "elements of truth and sanctification" outside the True Church by which people can achieve holiness and salvation. (Sound familiar?).


Do Supernatural Gifts Still Happen Today?
The CCM denigrates the sacramental system of the Church. A sacrament is a "visible sign of an invisible grace instituted by the historical Person of Our Lord Jesus Christ for the salvation of the human race, although every sacrament is not necessary for each member of the Church." They would have these sacramental gifts replaced by speaking in tongues, prophesy, and other such visible manifestations. Some, imitating certain Protestant sects, roll around on the floor and then handle poisonous snakes to show "God's protection." It is a fact, recorded in the Bible, that the Apostles and some early Christians did indeed speak in tongues and heal people. So why did it stop?

The charismata or "special gifts" of the Holy Ghost such as prophecies, healings, miracles, etc., were given to prove the claims of the Church and to foster conversions. With the achievement of the Church’s moral universality, the need for such phenomena ceased because of the presence in the Church of people of every nationality and because of the Church’s proven record as the One True Religion. Likewise, speaking in tongues was given so that all could hear and understand the preaching of the Gospel. None of these gifts were given for the personal sanctification of the individuals who received them. St. Augustine, Tract. xxxii, states, "Whereas even now the Holy Ghost is received, yet no one speaks in the tongues of all nations, because the Church herself already speaks in the languages of all nations: since whoever is not in the Church, receives not the Holy Ghost."

Some saints were given miraculous gifts, but the CCM would have the extraordinary become the norm. Likewise, these alleged gifts are now offered as "proof" of being in God's favor, yet the Council of Trent infallibly declared, "For even as no pious person ought to doubt of the mercy of God, of the merit of Christ, and of the virtue and efficacy of the sacraments, even so each one, when he regards himself, and his own weakness and indisposition, may have fear and apprehension touching his own grace; seeing that no one can know with a certainty of faith, which cannot be subject to error, that he has obtained the grace of God." (See Decree on Justification).

Errors Abound
The CCM promotes false teachings not only on grace and the continued necessity of charismata, but they foster other serious errors as well. Chief among them:
Unholy Gifts
Those who seek after such false gifts open themselves up to dire consequences:

1. Risk of Self-Deception: "And I greatly fear what is happening in these times of ours: If any soul whatever after a bit of meditation has in its recollection one of these locutions, it will immediately baptize all as coming from God and with such a supposition say, 'God told me,' 'God answered me.'  Yet this is not so, but, as we pointed out, these persons themselves are more often the origin of their locution."  (See St. John of the Cross: The Ascent of Mount Carmel. Book II Ch. 29)

2. Possession by demons: "Through the desire of accepting them one opens the door to the devil.  The devil can then deceive one by other communications expertly feigned and disguised as genuine.  In the words of the Apostle, he can transform himself into an 'angel of light' (II Cor. XI:14). (...)  Regardless of the cause of these apprehensions, it is always good for a man to reject them with closed eyes.  If he fails to do so, he will make room for those having a diabolical origin and empower the devil to impose his communications.  Not only this, but the diabolical representations will multiply while those from God will gradually cease, so that eventually all will come from the devil and none at all from God.  This has occurred with many incautious and uninstructed people."  (See St. John of the Cross: The Ascent of Mount Carmel. Book II Ch. 11)

Becoming More Bizarre
A new "charismata" known as "Holy Laughter" is also present at many CCM meetings. The person who is most responsible for this phenomenon is Rodney Howard-Browne, a South African Protestant evangelist who was born in 1961. It has been picked up by many in the movement. Rodney Howard-Browne reported: "One night I was preaching on Hell, and laughter just hit the whole place. The more I told the people what Hell was like, the more they laughed." "The Holy Ghost...might have you do something that no one's ever done before, and he might have you do something that's totally unique. But don't question, and don't argue, and don't ask, and don't try to devise and to plan it out but just follow the prompting of the leading of the Spirit of God and, oh, great and wonderful things shall be done, for God will move in diverse ways and with diverse anointing in these last days." Laughing about Hell? How does any of this help anyone?

When they are "slain in the Spirit," phenomena reported with "Holy Laughter include: shaking, jerking, loss of bodily strength, heavy breathing, eyes fluttering, lips trembling, oil on the body, changes in skin color, weeping, laughing, appearing drunk, staggering, dancing, falling, claiming visions, "hearing audibly into the spirit realm", inspired utterances--i.e.so-called prophecy, speaking in tongues, violent rolling, screaming, nausea as discernment of evil, smelling or tasting good or evil presences, tingling, pain in body as discernment of illness, feeling heavy weight or lightness, trances--altered physical state while seeing and hearing into the "spiritual world," inability to speak normally, removing some clothing, pawing people and roaring like a lion, walking like a chicken, howling like a wolf, digging the ground with hoofs like a bull while "prophesying," among others.

This totally insane behavior can only be the result of (a) mental instability/mass hysteria, or (b) demonic influence. St. Thomas Aquinas states that (1) prophesy can come from demons (they can guess at what the future holds given their superior intellect and knowing those who will do their work--they do not know the future as God does but can predict much with an uncanny accuracy); (2) prophets of demons can (in that sense) foretell the truth, and (3) the wicked can work wonders that appear to be miracles.

Conclusion
The CCM is totally heretical, and leads people to Hell. Remember the sobering words of Our Lord, "For there shall arise false Christs and false prophets, and shall show great signs and wonders, insomuch as to deceive (if possible) the elect."(St. Matthew 24:24); and again, "Not everyone that saith to me, Lord, Lord, shall enter into the kingdom of heaven: but he that doth the will of My Father who is in heaven. Many will say to me in that day: Lord, Lord, have not we prophesied in Thy Name, and cast out devils in Thy Name, and done many miracles in Thy Name? And then will I profess unto them, I never knew you: depart from me, you that work iniquity." (St. Matthew 7:21-23). The people involved with the CCM will soon learn (perhaps too late) that this is no laughing matter.
Posted by Introibo Ad Altare Dei at 3:32 AM