Judging The Book By The Cover 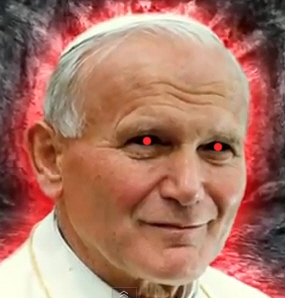 When Karol Wojtyla ("Pope" John Paul II), one of the most evil men who worked for the destruction of the Church, died, people were chanting "Santo subito," which roughly translates as "sainthood now." He is revered as "Saint" John Paul "the Great" in the Vatican II sect. When I call him "John Paul the Great Apostate" people look at me with horror: "How dare you say such a thing! Can't you see what a holy pope he was for so many years?"  How is it even possible that such diametrically opposed views can exist about this man? I believe the answer lies in two reasons; (1) the general ignorance prevalent about the Faith, and (2) concern with externals. It's a deadly combination that blinds one from seeing the truth.


What Faith Is--and What It Is Not

According to theologian Tanquerey, Faith is "the supernatural assent by which the intellect, under the command of the will and the influence of grace, firmly accepts revealed truths because of the authority of God Who is revealing." (See Dogmatic Theology 1: 193). John Paul II sees Faith as "an experiential state." Speaking to a group of clerics, Wojtyla said, "To enter into dialogue with God means to allow oneself to be won over and conquered by the luminous figure of the Revealed Jesus, and by the love of the Father Who sent Him. It is in precisely this that the faith consists.In faith, man interiorly enlightened and attracted by God, goes beyond the limits of purely natural knowledge, and experiences God in a manner that would otherwise be impossible." As you can see, Wojtyla is a good Modernist who reduces "faith" from an act of the intellect to feelings and experiences. This is reflected in the Novus Bogus "mass" where human entertainment, feeling good about yourself, and the elimination of anything deemed "negative theology" (like sin and Hell) reign supreme.

Wojtyla was a close friend of arch-Modernist Fr. Karl Rahner, whose teaching on the "anonymous Christian" was tantamount to universal salvation. Rahner was censured by Pope Pius XII, rehabilitated by Montini (Paul VI), and had a friend in Wojtyla who was greatly influenced by him. The heretical Vatican II document Gaudium et Spes (The Constitution of the Church in the Modern World) had Wojtyla, Cardinal Montini ( the future Paul VI), Cardinal Suenens, and Cardinal Lecaro as the chief architects. All were Modernists to the core. Gaudium et Spes along with Lumen Gentium (Constitution on the Church), set the foundation for the new religion--the Vatican II sect.

Lumen Gentium set up a false dichotomy between "the Church of Christ" and the Roman Catholic Church. In reality, they are identical, but this document of Vatican II falsely teaches that they are distinct. According to this Modernist document, the Church of Christ "subsists" in its fullness in the Catholic Church, but also subsists elsewhere in false sects according to how many "elements' they have. To have all the elements is best, but to have just some is equally good and leads to salvation. Gaudium et Spes teaches one of the trademark heresies of the Vatican II sect; the idea that by His Incarnation, Christ united himself with each man.  Vatican II speaks of a union between Christ and each man that results from the incarnation itself.  Wojtyla has taken this heresy and run with it full speed ahead to its logical consequence - universal salvation in a "church" that subsists everywhere.

"For by His incarnation the Son of God united Himself in some way with every human being.  He labored with human hands, thought with a human mind, acted with a human will, and loved with a human heart." (Emphasis mine).

John Paul II in his first "encyclical" Redemptor Hominis #13; "We are dealing with each man, for each one is included in the mystery of the Redemption and with each one Christ has united Himself forever through this mystery." (Emphasis mine).

This means that no one can ever be separated from God in hell. He bases this heresy on the teaching of Vatican II in Gaudium et Spes #22, that Christ has united himself with each man in the Incarnation. The whole point of the Catholic Church is to unite mankind to Jesus Christ through the Faith and Sacraments. If the union between all of mankind and Jesus Christ occurred at the Incarnation, then the Church has no value and is, in fact, pointless. This is the "faith" of Vatican II and Wojtyla; the heresy of Modernism.

Wojtyla was an actor, and what a great act he put on for those who didn't understand the Faith, yet desperately wanted to believe "the essentials" hadn't changed after Vatican II. Here's how he did it.

1. Make "the culture of death" your theme. JPII would constantly reiterate traditional Church teaching on abortion and euthanasia to the applause of "conservative" Vatican II sect members. Granted they are huge evils. Unfortunately, no one stopped to realize that they reached catastrophic proportions precisely because Wojtyla simultaneously helped push for the removal of Catholicism as the State religion. Countries that never had legal abortion or euthanasia (Belgium, Ireland, Spain, etc) fell as part of the "culture of death" once the influence of Catholicism was gone. After all, the "Church of Christ" subsists in all sects!

2. "Mass" is only important if you feel good going to it. The Novus Bogus must be "relevant," focus on the material needs of the poor in "homilies," and--most importantly--be fun, fun, fun! If you don't find it amusing, simply stop going. Hell is never mentioned, nor Christ's sacrifice. Retain some of the key words (He died for us, etc), but do something different (have a Happy Meal).

3. Invert the primary and secondary purposes of the sacraments. Baptism is about "initiation into the People of God." Gone is the primary effect; the remission of Original Sin (a negative concept). Also removed is that orthodox term "Mystical Body of Christ." Penance is "reconciliation" because doing penance for sin is negative, and we're all saved anyway. The Eucharist is about "breaking bread with your neighbor." Confirmation is not being a soldier for Christ, it is "the completion of Baptism." (As if Baptism is somehow "deficient.") Marriage is all about conjugal love, not procreation. "Anointing of the Sick" (formerly Extreme Unction) is about bodily and mental health, not preparing the soul to meet its Maker. Holy Orders is being the "president of the assembly" not an alter Christus to offer Sacrifice to God and forgive sins.

4.  McCanonizations. Make "saints" by the dozen everywhere you go to show "holiness" in everyone from everywhere, even if they died relatively recently and have suspicious backgrounds. Wojtyla made more "saints" from 1978-2005, than were made from 33-1978. (including the phony "canonizations" 1959-1978).

5. Travel everywhere. The more people see you, the more you seem "in touch with the people." You become a superstar, like the blasphemous hippy Jesus Christ Superstar.

6. Talk tough, but do nothing. Slap heretics like Hans Kung on the wrist, but don't excommunicate anyone. Actually, you can't since everyone is united to Christ by virtue of the Incarnation.

7. Sound profound, even when you're not. Talk about the "Theology of the Body," and come up with bold new concepts like, "the body of a man and a woman were made to complement one another." (Wow! Who woulda thunk it?)

8. Retain "traditional doctrine and discipline" while systematically undermining them. Be against women "priests" while allowing both men and women to do sacerdotal functions; i.e., distribute "communion,"  recite the "readings," bring up the "gifts," etc. Be against married "priests" while giving most duties to married "deacons," and make more and more exceptions for married clerics from Protestant sects to keep their wives should they want to be Vatican II sect "priests."

The majority of Catholics never knew the Faith well in the decades just prior to Vatican II. They were robbed of the truth and had it replaced with a counterfeit sect; a pallid imitation. Those who see without the eyes of faith perceive Wojtyla as a "saint." For those of us with the True Faith, we don't judge by worldly standards and appearances. "Stop judging by mere appearances, but instead judge correctly." (St. John 7:24).
Posted by Introibo Ad Altare Dei at 3:50 AM