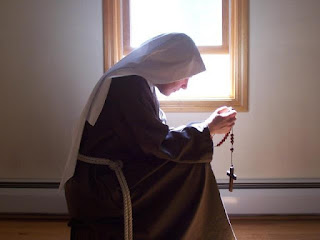 Praying for someone's conversion to the One True Church is a most Catholic act. You would think that there would be no controversy attached to this topic, but somehow controversy seems to find its way into almost every aspect of Traditional Catholic teaching these days. Without a pope, division is the logical result because "Strike the Shepherd, and the sheep will be scattered..." (Zechariah 13: 7). We should strive to have as much unity as possible on topics where there is no clear answer. Too often Traditionalists forget the maxim of St. Augustine, "In essentials, unity; in non-essentials, liberty; in all things, charity."

Now, when it comes to straightforward prayers for Mr./Miss/Mrs. X who is a (Jew, Protestant, Hindu, Moslem, atheist, member of the Vatican II sect, etc.) to be enlightened by the grace of God to become a Traditionalist, we have no problem. However, someone raised the query, "Is it OK to pray for the soul of a deceased relative who was Protestant?" Ask the Vatican II sect clergy, and they will say it's OK to canonize him. Ask a Feeneyite, and they will tell you they are burning in Hell so don't waste your time. In medio stat veritas. "The truth stands in the middle." In this post I will explain and defend Church teaching against the infamous Dimond brother Feeneyites, and I will also revisit the Una Cum issue I tackled in my post of 7/10/17.

Are Prayers For Deceased Non-Catholics Permissible?

There's an old aphorism, "A proof-text without context is a pretext." If you take something out of the context in which it was written and hold it up as "proof" for a preconceived notion, you're not interested in the Truth, just validating your point; "My mind is made up, so don't bother me with the facts." This is the hallmark of Fred and Bobby Dimond of "Most Holy Family Monastery" (MHFM). In their article Catholics May Not Pray For Deceased Non-Catholics, Fred and Bobby contort Church teaching. They begin with this general statement:

It’s a dogma that there is no salvation outside the Catholic Church.  All who die as non-Catholics go to Hell.  Therefore, prayers may not be offered for people who die as non-Catholics.  If a person was a non-Catholic or a heretic during life, unless there is evidence of a conversion to the true faith in the external forum, the person is considered to have died as he or she lived (i.e. as a non-Catholic and outside the Church).  Therefore prayers may not be offered for a person who, based on the last available evidence, was a non-Catholic or a heretic on the hope that there was a conversion in that person’s final days.  Prayers may only be offered for people who die with the true faith.  Here are some quotes that reiterate the Church’s teaching that Catholics may not pray for (or consider among the faithful departed) those who die as non-Catholics or without the true faith. (See http://www.mostholyfamilymonastery.com/catholicchurch/catholics-may-not-pray-deceased-non-catholics/#.WYvioNQrKt_).

It is true that there is no salvation outside the One True Church and all non-Traditionalist Catholics who die as such go to Hell. The rest is woefully wrong. They claim that unless there is evidence that the person converted, prayers may not be offered in the hope that there was a conversion in the person's final days.

Let's see what the Church has to say:

1. 1917 Code of Canon Law
Canon 1240 speaks to the types of persons to be denied ecclesiastical burial. They include Masons, excommunicates, those who committed suicide, those who live as public and notorious sinners, etc. However, Canon 1241 says a person deprived of Christian burial "shall also be denied any funeral Mass, even an anniversary Mass, as well as all other public funeral services. Priests may say Mass privately for him and the faithful may pray for him. (See canonists Abbo and Hannon, The Sacred Canons, 2: 495-497; Emphasis mine). Obviously the Church does not give up hope in a last minute repentance/conversion, but Fred and Bobby do.

2. Theologian O'Connell
"So far as the dead are concerned, the Exequial Mass and Anniversary Mass (or other public funeral offices)may not be offered for a person to whom ecclesiastical burial had been denied...It is not, however, forbidden to offer a Mass privately for such persons." (See The Celebration of Mass, The Bruce Publishing Company, Milwaukee [1941], pg. 45; Emphasis mine).

3. Theologian Szal
"But if he [a schismatic] gave no signs of repentance, then Mass can still be said for him, but only privately and in the absence of scandal." (See The Communication of Catholics with Schismatics, CUA Press, [1948], pg. 181; Emphasis mine).

What proof did the Dimond brothers give for claiming Catholics can't pray for deceased non-Catholics? A quote from St. Thomas Aquinas, "St. Thomas Aquinas, Summa Theologiae, Suppl. Q. 71, A. 5. “Gregory says (Moralia xxxiv): There is the same reason for not praying then (namely after the judgment day) for men condemned to everlasting fire, as there is now for not praying for the devil and his angels who are sentenced to eternal punishment, and for this reason the saints do not pray for dead unbelieving and wicked men, because, forsooth, knowing them to be already condemned to eternal punishment, they shrink from pleading for them by the merit of their prayers…” Yes, THE SAINTS do not pray for dead and unbelieving men because they know for certain who they are, and we do not (except for Judas Iscariot, for the Catechism of the Council of Trent teaches, "...but the priesthood brings to them [i.e., evil clerics] in its train the same rewards the Apostleship brought to Judas--eternal perdition." pg. 213).

The other quotes from, e.g., Pope Gregory the Great, clearly mean prayers are not offered for non-Catholics publicly, because no one but God knows what happens between Him and a soul prior to death except by special revelation. We know the canonized saints are in Heaven; that is an infallible decree. We know Judas is in Hell. For everyone else, we may hope they were saved by God in the last moments of life, being brought into the Church infused with faith and sanctifying grace, because nothing is impossible with God. Prayers said for them, if they did not convert, are not "wasted;" they will be used by God for another poor soul--the same as prayers for someone whom is now (unknown to us) in Heaven are never "wasted."

In the comments section of that post, my conclusion was challenged by a reader who alleged to pass on a comment from Fr. Cekada who holds the view that Una Cum is impermissible to attend. I don't know if the anonymous commenter was the same person who sent me an anti-Una Cum article written by the late Patrick Henry Omlor. I also have no way to verify if the alleged comment was actually made by Fr. Cekada or not (I will assume, for sake of Charity, it was not). My training as a lawyer (and my thirst for knowledge when challenged) made me do further research. Fr. Cekada is alleged to have written, "There is no citation in the article to any Vatican decree. The author merely provides a link to an 1806 Latin-English missal for the laity in which [the] Latin text of the Canon contains the phrase “pro Rege nostro N.” (for our King, N.). The Missal of Pius V discontinued the mention of the king or civil rulers in the Te Igitur, and the practice was allowed only by way of privilege (as in Spain and Austria), where the ruler was a Catholic. Until I see an actual Vatican decree, therefore, I will treat the claim as nonsense."

I went back and examined Fr. Cekada's article The Grain of Incense available to view/download at traditionalmass.org. On page 10, footnote 50, Fr. Cekada writes, "... From [theologian Fr. Ignatius] Szal (183), though, it seems that the most the Holy See occasionally tolerated was a prayer for a lay heretic or schismatic in his capacity as a head of state (King, President, etc.) — but never one for a heretical or schismatic cleric." Here, Fr. Cekada cites to theologian Szal and admits that heretics and schismatics were prayed for liturgically! So why would he need a Vatican decree to support praying for the heretical King of England, to give credence to this already established fact? There is direct confirmation the King of England was mentioned liturgically, as you will read below.

This changes his argument substantially to, "It's permissible to pray for a heretical head of state, but not a heretical cleric." Says whom? When I say, "whom" I mean what approved theologian, canonist, or decree of the Holy See supports this contention? Now Fr. Cekada is inferring something not expressly addressed. He also asserts that the heretic is prayed for "in his capacity as a head of state." I don't know where he got this idea, but it was not from Szal. Here is what Szal has to say on page 183 of his book The Communication of Catholics With Schismatics (cited previously in this post):

Benedict XIV, in an encyclical letter of March 1, 1756, condemned the practice of mentioning liturgically the name of the Bishop or Patriarch when he was recognized as a heretic or a schismatic. However, a favorable reply was given by the Holy Office on February 23, 1820, for the Archdiocese of Quebec. It was revealed in this case that prayers were said for the Pope, for the Bishop, and for the King, at Benediction of the Blessed Sacrament. And at Solemn Mass there was sung the "Domine, salvum fac Regem." The continuance of both practices was tolerated. Here, then, there was question of a heretical monarch, but the same principle of tolerance could also find application when there was question of a schismatic.

The foregoing answer was evidently within the memory of the Holy See in the following case. The President of the Greek States had asked that prayers be said for him. The Bishop had proscribed the words, Domine, salvum fac Praesidem after the "Domine, salvum fac Regem." The Holy See replied the arrangement could stand.

In another instance the Catholic Latin bishops were asked by the local governor to solemnize the feasts of the courts in their churches. They limited the solemnity to the Ambrosian hymn and Benediction of the Blessed Sacrament, after which the accustomed triple acclamation, "viva il Re," was made. In its response to the Bishop of Santorin the Holy See recalled former similar instructions, and stated that the prayers were to be directed not only for the temporal welfare of the governor, but also for his true happiness, namely, that he receive the precious gift of faith.

The implications of the foregoing cannot be overstated.

We should pray for the conversion of non-Catholics, that they may become Traditionalists (true Catholics) in this time of near universal apostasy. They need our prayers, and our help to see the truth. Do not bother with Fred and Bobby Dimond's "theology." Also, as much as I respect and admire Fr. Cekada, I call on him to re-think his position. Re-read Szal. If we are to get a pope back, we must get more unity than we have, and a "follow me or die" attitude helps no one on matters not settled. When dealing with non-Traditionalists (or even Traditionalists with whom we disagree), never forget the words of 1 Peter 3: 16-17, "But in your hearts revere Christ as Lord. Always be prepared to give an answer to everyone who asks you to give the reason for the hope that you have. But do this with gentleness and respect, keeping a clear conscience, so that those who speak maliciously against your good behavior in Christ may be ashamed of their slander."
Posted by Introibo Ad Altare Dei at 3:07 AM