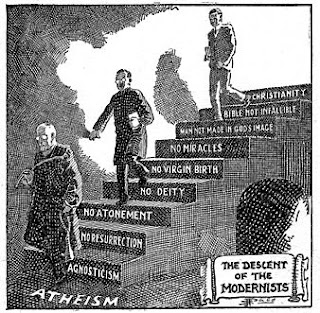 The Vatican II sect is a man-made religion created in the wake of the death of Pope Pius XII. It is founded on the heresy of Modernism, which is so evil, Pope St. Pius X called it the "synthesis of all heresies." While many people rightly "know it when they see it," there is no shortage of those who don't fully understand what it is, how it developed, and the remedies against it. Pope St. Pius X wrote two very strong Magisterial documents against Modernism: The encyclical Pascendi Dominici Gregis (1907), and a syllabus of Modernist errors, Lamentabili Sane (1907). These decrees are a perfect dissection of the problem, however, they are written for those well-versed in both philosophy and theology. Luckily, in 1907, a very holy and learned priest, Father J.B. Lemius, wrote a 155 page booklet entitled A Catechism of Modernism. His goal was to make the teaching of Pascendi accessible to all people in a "question and answer" catechism-type of format.

The booklet was endorsed by no less than Raphael Cardinal Merry del Val, the staunch Anti-Modernist theologian and saintly adviser to Pope St. Pius X. Fr. Lemius' work was reprinted by TAN Books in 1981. In this week's post, I will seek to condense the Anti-Modernist catechism so that all may better understand the greatest enemy of humanity, the Modernist Vatican II sect, which apes the One True Church and leads millions to their eternal damnation. I take no credit for what is written. It was all put together by Pope St. Pius X, and masterfully broken down into a more reader-friendly format by Fr. Lemius. I merely try to make an even more truncated version, with the hope of not sacrificing too much material for the sake of brevity. The section on "Modernism and the Vatican II sect," contains but a few of countless examples, culled by me from various sources, which demonstrate the Modernist doctrine that fuels the sect.

How Did Modernism Originate?

Remedies Against Modernism
Modernism and the Vatican II sect

Conclusion
Without exaggeration, Modernism is the cause of all the major problems in our sick world today. With the Church driven underground, morality and truth have been obscured to a degree not seen since the days of Noah. Atheism is the logical and final outcome of Modernism. Atheism is on the rise like never before; and the "New Atheists" are denigrating religion and making disciples. Even the Vatican II sect rag, The National Catholic Register, admits: "Surveys show that atheism is growing at an alarming rate across the globe. In a very short time, countries such as France, the Netherlands, New Zealand, the United Kingdom and Australia will lose their Christian majorities to those who consider themselves atheists or 'religiously unaffiliated." (See http://www.ncregister.com/blog/guest-blogger/dawkins-is-wrong-the-fastest-growing-religion-is-atheism).

The total rebellion against God is nearly complete. As Fr. Lemius states on page 119 of his Catechism:
"Q: Describe the gradual descent of the human mind to the denial of all religion?
A. The first step in this direction was taken by Protestantism; the second is made by Modernism; the next will plunge headlong into atheism."