Don't Bet On It 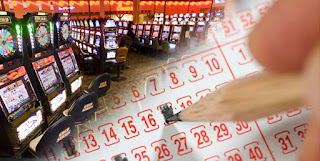 It was the summer of 1978, and very hot here in New York City. It was a Saturday and I was having a catch in the street with my dad, when our neighbor "Ed" (not his real name) came over and walked up to my father. I grew up in a very poor section of the city, and New York was going through a tough financial crisis. Ed (about 50 years old at the time) took out a twenty dollar and a five dollar bill from his pocket. To put things in perspective, when adjusted for inflation, $25 in 1978 equals just over $100 in 2018. Ed worked for a company that constructed asphalt roofs, and he made the equivalent of about $17,000 in today's economy. He had a wife and three teens, and they barely made enough to survive. His company, like many of the time, had no pension or provision for their employees to retire. Ed worked long and laborious days for little money. Less than ten years later, the job would claim his life, as he contracted lung cancer from breathing in the carcinogens associated with hot asphalt fumes.

He showed the money to my father and told him, "Today is the day I finally get to retire. I've saved up for weeks to buy lots of lottery tickets and I'm going to win!" (His words as I best remember them). My father wished him luck. Poor Ed was depressed at the end of the week when the only thing he got was $25 less money when he lost. In 2018, there are plenty more like Ed who believe their economic salvation rests with gambling in one form or another. Many others struggle with gambling addictions. The purpose of this post is to lay out the teaching of the Church on gambling, and to offer my reasons why I believe gambling (in all its forms) should be avoided. Please note that Church teaching must be followed, not my opinions. I have no Magisterial authority, and I have never claimed to be a theologian or canonist. Follow what the Church teaches, but my opinion is just that--a layman's opinion, with which you may agree or not.


The Teaching of the Church on Gambling

1. Betting. This is defined as a contract in which two or more persons disputing the truth of some event lay down a sum of money to be given to the person who was right. Theologian Prummer sets out two conditions that must be met in order for bets to be moral. First, they must be made for a morally good purpose, and second, the bet must be made on something that is both lawful and uncertain for both parties.

2. Gaming. This is defined as an aleatory contract [i.e., a contract where an uncertain event determines the parties' rights and obligations] whereby a reward is given to the winner of a contest undertaken as a pastime.
There are three kinds of gaming: (a) Games of Skill are those in which the result of the game depends largely on the skill of the players themselves [e.g. football or horse racing]; (b) Games of Chance which depend purely on random acts requiring no skill [e.g., rolling dice or "craps"]; (c) Games of Mixed Character which depend partly on skill and partly on chance [e.g., poker]. (Prummer lists the lottery under gaming).

In order for games that are played for stakes to be moral, five conditions must all be met:

One can easily see that while the old Bingo games played pre-Vatican II can easily meet the five criteria, modern casinos and lotteries are much different. Hence, theologian Prummer warned as far back as 1957, "Since games played for stakes are most dangerous because of the serious disorders that often ensue, the confessor should prudently censor them." (Ibid, pg. 164). Likewise, "Civil laws today [1957], as a result of the many abuses which can easily arise, prohibit betting completely or partially or declare it void...These statutes seem to be legitimate and, ordinarily speaking, may be followed in conscience." (Ibid, pg. 164).

Banning gambling seemed legitimate in 1957, and I can only wonder what Fr. Prummer would say today. The fourth and the fifth criteria above seem the hardest to ensure, and there are other evils that go in tandem with gambling---all of which will be considered next.

The Many Serious Problems With Gambling

1. It can become addictive. The American Psychiatric Association (APA's) Diagnostic and Statistical Manual, fifth edition (DSM-5), includes gambling addiction as a psychological disorder. No one starts out with compulsions/addictions, they are brought on by people's choices, just like the choice to use drugs leads to drug addiction. Problem gambling is harmful to psychological and physical health. People who live with this addiction may experience depression, migraine, distress, intestinal disorders, and other anxiety-related problems. As with other addictions, the consequences of gambling can lead to feelings of despondency and helplessness. In some cases, this can lead to attempts at suicide. The rate of problem gambling has risen globally over the last few years. In the United States in 2012, around 5.77 million people had a gambling disorder that needed treatment. (See https://www.medicalnewstoday.com/articles/15929.php)

2. Gambling leads to materialism. A new paper in the Journal of Gambling Studies takes this angle. As the authors write, "gambling has never been studied from a materialism perspective."

In other words, for a behavior that involves trying to win money, there’s a surprising lack of research on whether materialistic attitudes are a factor in gambling. To address this gap, the researchers surveyed 65 problem gamblers and 65 non-problem gamblers, administering surveys about their gambling behavior, financial attitudes and self-esteem.

Christ tells us, "...Take heed and beware of all covetousness; for a man's life doth not consist in the abundance of things which he possesseth." (St. Luke 12:15). Scripture also warns us that "Whoever loves money never has enough; whoever loves wealth is never satisfied with their income.This too is meaningless." (Ecclesiastes 5:10).

3. It exploits the poor. If gambling was a good way to get rich, you would see millionaires, billionaires and upper class professionals playing it, and thanking the government for allowing them to get rich this way. Last month, I went to get gas and thought I'd have to wait on a long line. The line was for "Mega-Millions" with working class poor people ( I saw their cars and clothes) spending their money hoping to "retire" like Ed. Gambling is akin to a tax on the poor and people who can't do math. This is is a mathematical, and statistical fact. Americans spent more than $80 billion on lottery tickets in 2016 -- more than they spent on books, movie tickets, music, video games, and sports tickets -- combined.  The odds of winning the "Powerball" or "Mega-Millions" grand prize are, respectively, 1 in 292,201,338 and 1 in 302,575,350. The odds of getting struck by lightening are one in a million. So in 292,000,000, approximately 292 will be struck by lightening, but only one will win "Powerball." Studies also show that the zip codes that spend four times what anyone else does on lottery tickets are those in lower-income parts of cities.

According to a 2008 study reported by Business Insider, households with incomes under $13,000 per year spend 9 percent of that on lottery tickets. As it also pointed out, "you are 17 times more likely to get hit by falling airplane parts than you are to win the lottery." (See https://www.businessinsider.com/households-earning-less-than-13000-a-year-spend-9-of-their-income-on-lottery-tickets-2012-3).

4.  Casinos attract crime. Just over ten years ago, in Bangor, Maine, a 41-year-old housekeeper forged $40,000 in checks belonging to elderly people in the assisted-living home where she worked, then gambled it away at Hollywood Slots, a cavernous 1,000-slot-machine establishment. She pleaded guilty, blaming an addiction to gambling, and in 2008 received a three-year prison term. "Casinos, Crime, and Community Costs," published in 2006 in The Review of Economics and Statistics, a prestigious academic journal produced by Harvard and MIT, examined crime rates in every county in the nation covering a period of 20 years – from 1977, just before the first casinos outside Nevada were built in Atlantic City, to 1996. It concluded that opening a casino led to local crime increases averaging eight percent.

5. Gambling is linked to alcoholism. Some people find there is a connection between the effects of alcohol and what happens when they gamble. This may mean they:

While gambling may be moral, as outlined by theologian Prummer, five factors must be taken into consideration. Can we honestly say that fraud is excluded and financial gain is not the main motive? Here's what gambling does:
Is this something in which a Traditionalist should participate? In my opinion, no. Donate the money to your Chapel or Church and have the Holy Sacrifice offered for your intentions or for someone's soul instead. If your Church or chapel has Bingo or a raffle, that's fine. Government sponsored gambling is bad news. Several years ago, the state of California was pushing its citizens to buy more Powerball tickets. You saw ping pong balls falling from the sky while the song California Dreamin' played. The message was "Believe in Something Bigger." Unfortunately, they did not mean God. Need any more be said?