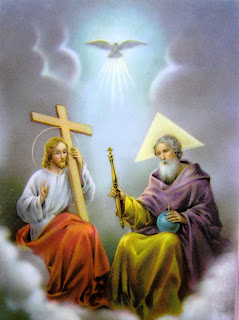 To My Readers: I am once more indebted to Lee for providing another outstanding post to be published while I catch up on my work and personal life. Please feel free to comment as usual. Any comments or questions specifically directed to me will always be answered as usual, but it might take me a bit longer to respond this week.
God Bless you all, my dear readers---Introibo
SPECIAL ANNOUNCEMENT: I was asked by Mr. Kevin Davis of Catholic Family Podcast to do a series of podcasts on the occult, as I have researched the topic for years, and have written many posts warning of the "Occult Revival" since Vatican II. I told him it would be my honor to get the word out in another excellent form of media. Look for the first podcast to come out later this week.---Introibo
Update 10/25/22: Here is the podcast link
https://m.youtube.com/watch?v=4I0A0UrKPwU

With many people beginning to visualize the problems in the Conciliar religion, it oftentimes will happen that some inadvertently escape a false religion to join another false religion. Some of these people are searching for the truth as they church hop, while others get deceived into thinking that a particular religion is really the true one, when it is in fact not. One religion in particular is the Eastern Orthodox religion. Unfortunately, there is nothing Orthodox (right in its teaching) about it, nor can it claim to have been faithful to the early Church for 900 years prior to its founding by Photius (more on that later).

The Orthodox are most notably known for their schism with Rome because of their refusal to submit to the Roman Pontiff (the pope) as the final authority over the entire Church but what they are not rebuked enough for is the dogmas they deny. One in particular is known as the filioque which was added to the Nicene Creed by the Church.

To better understand why Photius held to certain beliefs during the Photian Schism, it's best to read about his background. Fr. John Laux's book Church History gives a very detailed description. He says the following:

In the middle of the ninth century a patriarch of Constantinople made the first deliberate attempt to sever the Greek Church from the West by appealing to the national pride of his countrymen. This man was Photius.

We saw above the St. Theodora re-established the Catholic faith in the East in 842. All went well until her son Michael, known in history as "the Drunkard," came of age and began to reign. This sensual prince fell entirely under the influence of his uncle Bardas, a profligate of the most despicable character, who lived in sin with one of his near relatives. On the feast day of the Epiphany, 857, St. Ignatius, who had succeeded St. Methodius as patriarch of Constantinople in 846, refused to give Bardas Holy Communion. Ignatius was arrested and imprisoned, and upon refusing to resign his office was illegally deposed, while Photius, a layman, was installed as patriarch in his place.

Photius was easily the most learned man of his time, as his monumental work, the Bibliotheca, which consists of abridgments of and extracts from 280 volumes of classical authors amply testifies. But even his greatest admirers admit that he was worldly, crafty, ambitious, and unscrupulous. When he saw that his usurpation caused discontent among the clergy and the people, he persuaded the Emperor to send ambassadors with costly presents to Pope St. Nicholas I in order to secure his approbation. In spite of false statements made by the ambassadors-they said that Ignatius has resigned his see because of his advanced age, and voluntarily retired into a monastery-the Pope refused to decide until he had investigated the matter. The legates whom he sent to Constantinople for this purpose, yielding to threats of bribery, acknowledged Photius as lawful patriarch. But Nicholas saw through their deceit, and in a letter to the Eastern bishops condemned and deposed Photius.

The rage of the proud intruder knew no bounds. In a letter addressed to all the patriarchs and bishops of the East he railed against all claim to spiritual authority on the part of the Holy See, declaring it intolerable, above all, since the imperial crown of the West had been set by Leo III on the head of Charlemagne, a barbarian Frank. He accused the Latin Church of heresy for adding the word "Filioque" (and from the Son) to the Nicene Creed, and attacked the discipline and the usage of the Latins, particularly their practice of fasting on Saturday, their use of milk and cheese on fast days, and the enforced celibacy of the clergy. His hatred of Rome at last led him to do what none of his predecessors had dared to do: he excommunicated the whole Latin world and pronounced sentence of deposition against Pope Nicholas (867).

The triumph of the arrogant patriarch was short-lived. The drunken and vicious Emperor over whom he had held sway so long was murdered in 867. Basil, his murderer and successor, cast Photius into prison and reinstated Ignatius. A Council-the Eight Ecumenical-which assembled at Constantinople in 869 condemned Photius and his sacrilegious acts, and restored union under the authority of the Apostolic See. After the death of Ignatius in 877, Photius again ascended the patriarchal throne and in order to be approved by Pope John VIII professed in express terms to acknowledge the Roman Primacy. He soon broke his word and was excommunicated once more. He ended ingloriously. In 886 the Emperor Leo the Philosopher deprived him of his office and banished him to a monastery in Armenia. After this, we hear no more of him.