Lacking the "Fullness of Marriage"...Or Is It "Partial Fornication"? 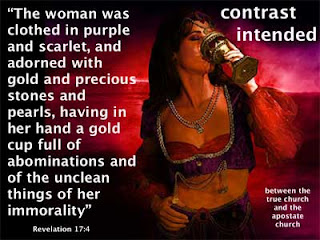 Modernist theology has developed the idea of "truth in degrees." Lumen Gentium is the Vatican II document that began the "Frankenchurch" heresy, to wit: The Church of Christ is not identical with the Roman Catholic Church. It "subsists" there in its "fullness," but it is also present in other "churches" according to how many "elements of truth" they supposedly possess. Hence, the Eastern Orthodox schismatics, who have valid orders and seven sacraments have more elements than Lutherans, who have the Bible and so forth. To have all the elements is best, but having just some is OK too. It's been compared to a McDonald's Happy Meal where you need the box and the toy for the fullness of the meal, but if you get the elements of the burger and fries it still nourishes you.

It was only a matter of time before this would spread to morality. Now, according to Mr. Jorge Bergoglio, aka ""Pope" Francis, you can be fully or partially moral. In 2010, Bergoglio co-authored a book entitled On Heaven and Earth with a left wing Rabbi named Abraham Skorka. In Chapter 16, Begoglio writes,"It is a sociological fact that co-habitation certainly does not have the fullness, or the greatness of marriage...."

So "shacking up" is now "co-habitation" and it doesn't have the "fullness" of marriage!! Interestingly, Chapter 16 is on the topic of Same Sex "Marriage;" therefore it won't be long before sodomite unions are seen as less desirable as true marriage but a "partial marriage" that contains "elements" of true marriage and must be given legal recognition.  In the same chapter, he continues with this madness:

"he (a "catholic priest") does not have the right to force anything on anyone's private life. If God, in creation, ran the risk of making us free, who am I to get involved? We condemn spiritual harassment that takes place when a minister imposes directives, conduct, and demands in such a way that it takes away the freedom of the other person".

"Spiritual harassment"-- that's a new one. Will there be "quid pro quo" spiritual harassment (whereby you offer someone forgiveness in return for turning away from sin) and "hostile environment" spiritual harassment (when you condemn what's wrong publicly and make the sinner uncomfortable)?
Your private sins send you to a public Hell, and it is the concern of a every true Catholic priest and bishop to admonish the sinner as a spiritual work of mercy (unlike "spiritual harassment," the spiritual works of mercy are part of Catholic teaching). But Bergoglio is not a bishop, not a priest, not even a Catholic. He's more interested in being "nice" by the world's standards than in saving souls from Hell. He is not a "Good Shepard" he is a hireling who cares not for his sheep. (See St. John 10: 12-13).

What does the True Church teach? From Pope Pius IX's Syllabus of Errors (1864):

Condemned proposition 40. The teaching of the Catholic Church is hostile to the well- being and interests of society. -- Encyclical "Qui pluribus," Nov. 9, 1846; Allocution "Quibus quantisque," April 20, 1849.

Condemned proposition  56. Moral laws do not stand in need of the divine sanction, and it is not at all necessary that human laws should be made conformable to the laws of nature and receive their power of binding from God. -- Allocution "Maxima quidem," June 9, 1862.

Condemned proposition 77. In the present day it is no longer expedient that the Catholic religion should be held as the only religion of the State, to the exclusion of all other forms of worship. -- Allocution "Nemo vestrum," July 26, 1855.

Condemned proposition 79. Moreover, it is false that the civil liberty of every form of worship, and the full power, given to all, of overtly and publicly manifesting any opinions whatsoever and thoughts, conduce more easily to corrupt the morals and minds of the people, and to propagate the pest of indifferentism. -- Allocution "Nunquam fore," Dec. 15, 1856.

Hence, the teaching of the Catholic Church is necessary to the well-being and interests of society. Moral laws need divine sanction, and human laws should be made conformable to the laws of nature (which excludes sodomite unions) and receive their binding power from God (Who condemns fornication).  Every State should ideally be a Catholic State to the exclusion of all other forms of worship and the opposite will corrupt the minds and morals of the people more easily.

You've all heard the old adage "you can't be a little bit dead or a little bit pregnant." In Vatican II's Modernist theology you just might be able to do so! Take abortion: it's not murder, it's preventing the fullness of life to a woman who does not experience the joy of the fullness or greatness of pregnancy! Sounds absurd, but no more so than the Modernist clap-trap Begoglio's sect spreads. Begoglio is fully Modernist and partially mad in his race towards Hell. Don't go with him.
Posted by Introibo Ad Altare Dei at 8:03 PM