Soldiers Of Christ No More 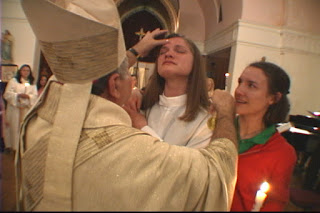 The news is increasingly more disturbing to read. Conflict after conflict is all we read and see. From the Mohammedan infidels attacking France, to Turkey shooting down a Russian plane, the world is in a constant state of struggle. However, we must not forget that the greatest battle we wage is the one for our immortal souls. "For our wrestling is not against flesh and blood; but against principalities and power, against the rulers of the world of this darkness, against the spirits of wickedness in the high places." (Ephesians 6:12)

In pointing out what was wrong with the Vatican II "sacraments," I thought I would dedicate a post to the sacrament of Confirmation. This great sacrament is defined in The Baltimore Catechism thus:

According to the Vatican II sect's "Catechism of the Catholic (sic) Church" :
"ARTICLE 2
THE SACRAMENT OF CONFIRMATION

The whole idea of being at a war against "the devil, the flesh, and the world," has been excised. It is now more "initiation" into the "People of God" (notice they always like to use the appellation "Christian" in place of "Catholic") which includes non-Catholics who are not "in full communion" with the "Church of Christ"--which is present in its fullness in the Catholic Church, but also present in false sects by different "degrees of participation" measured according to how many "elements of truth and sanctification" each sect possesses.  Also missing is the traditional emphasis on "resisting the attacks of our spiritual enemies" to be replaced by a call to "spread and defend the faith by word and deed." Although "Pope" Francis will remind you, "Proselytism is nonsense."

What, therefore, is the True teaching on Confirmation, and how has the Vatican II sect invalidated it? I will answer in two parts.


THE TRADITIONALIST CATHOLIC TEACHING ON CONFIRMATION

The Holy and Ecumenical Council of Trent infallibly defined: "If any one saith, that the Confirmation of those who have been baptized is an idle ceremony, and not rather a true and proper sacrament; or that of old it was nothing more than a kind of catechism, whereby they who were near adolescence gave an account of their faith in the face of the Church; let him be anathema."

The Church has always taught that Confirmation is not necessary unto salvation, but it is an indispensable aid in helping a person fight for the Faith and the salvation of their soul; even to the point of sacrificing life itself to obtain eternal life in Heaven. The Apostles experienced miraculous gifts when the Holy Ghost descended upon them at Pentecost. While those miraculous gifts are not manifested today (healing others, speaking in tongues, etc.) the strength of character is manifested. Just as there have been reports of people performing extraordinary feats of strength under duress, likewise, the Gifts of the Holy Ghost will manifest to help us, provided we are in the State of Grace.

St. Therese of Lisieux prepared diligently for this sacrament, and wrote, "On that day [she made her  Confirmation]I received the strength to suffer, a strength which I much needed, for the martyrdom of my soul was soon to begin." It is of Divine and Catholic Faith that Confirmation is one of three sacraments (the other two being Baptism and Holy Orders) which leaves an indelible mark, or 'character,' on the soul, and can therefore never be repeated without committing a grave sin of sacrilege. Pope Clement XIV approved a decree in 1774 which stated, "...this Sacrament cannot be refused or neglected without incurring the guilt of mortal sin, if there be an opportune occasion of receiving it."

The requirements for valid reception of Confirmation are not as clearly defined as the other sacraments, but the Vatican II sect has heaped so much doubt upon doubt as almost assuredly render it null and void. Let's examine the minister, the matter, the form, and the intention of the sacrament and what has happened to each.

The Minister of the Sacrament

In 1968, the new Pauline rite of episcopal consecration and priestly ordination were introduced. They are null and void. Hence, unless the minister is (at least) validly ordained a priest prior to 1968, Confirmation is unquestionably invalid.

The Matter of the Sacrament

The remote matter is Holy Chrism which is made from olive oil and balsam which is then consecrated by a bishop on Maundy Thursday.

The Vatican II sect's Congregation of Divine Worship issued a decree in 1971 permitting the use of of other oils from other plants and seeds (e.g., coconut or vegetable oil) in the place of olive oil for Confirmation. This novelty has no basis in Church teaching and/or practice. (See Documents on the Liturgy, no. 3864)

The proximate matter is considered by most theologians to be both the anointing with Holy Chrism and the individual imposition of the hands by the bishop. (See theologian Pohle, Dogmatic Theology, B. Herder Book Co., 1923, 12:292-293)

The imposition of hands for each individual has been suppressed. Montini ("Pope" Paul VI) issued his "Apostolic Constitution" Divinae Consortium Naturae promulgated August 15, 1971, making the new rite mandatory effective January 1, 1973. He responded to a query (See Documents on the Liturgy, no. 306) stating that the anointing with chrism without the imposition of hands "sufficiently expresses the laying on of hands." Hence, most "bishops" do not impose the hands on the individual.

The use of other oils than olive oil in the Chrism, the lack (in almost all cases) of a valid bishop (or authorized priest as in the Eastern Rites) to consecrate it, and the suppression of the individual imposition of hands, renders the sacrament highly doubtful on these grounds alone.


The Form of the Sacrament

The new rite of Paul VI states: "Be sealed with the gift of the Holy Spirit" shall be the new form of the Sacrament. Montini lies in Divinae Consortium Naturae, claiming, "The Sacrament of Confirmation is conferred through the anointing with chrism on the forehead, which is done by the laying on of the hand, and through the words: 'Accipe Signaculum Doni Spiritus Sancti.'" Just a few paragraphs before he had written (correctly): "In the East, in the fourth and fifth centuries there appear in the rite of anointing the first indications of the words 'signaculum doni Spiritus Sancti'" This is translated as "The sign of the Gift of the Holy Ghost." However, Montini renders it: "Accept the sign of the Gift of the Holy Ghost" and incorrectly translated in English to "Be sealed with the gift of the Holy Spirit" as I wrote above. It has been changed from the active giving of the character and gifts of the Holy Ghost to some passive request for the person to accept something. This ties in nicely with ecumenism, so as not to offend our "separated brethren" who detest the idea of an ordained clergy with powers to effectuate a sacrament "ex opere operato" (i.e., by the very performance of the sacramental sign).

Changing the sense of the words of the form renders Confirmation highly doubtful on this point alone.

The bishop imparts the Character on the soul of the candidate to receive the Holy Ghost and His Seven Gifts to make the recipient a "soldier of Christ."

The faulty form gives the idea that instead of getting an indelible mark on the soul, you are merely passively receiving something. Montini stated, " in a certain way [Confirmation] perpetuates the grace of Pentecost in the Church." (See  Divinae Consortium Naturae). It is ambiguous at best. The Church once again bestows the grace of Pentecost, really and actively, not "in a certain (passive) way" of recalling an event in the past and accepting a gift from God. Any minister who would positively intend to do that, may have a defective intention invalidating the sacrament.

Once more, the Modernists of the Vatican II sect have destroyed something sacred. If you have not been confirmed by a Traditionalist Bishop in the traditional rite of the Church, please try and do so as soon as practicable. In these tough times, we need to be soldiers for Christ, not cowardly Modernists who have raised the white flag of surrender to the devil, the flesh, and the world.

Posted by Introibo Ad Altare Dei at 3:05 AM