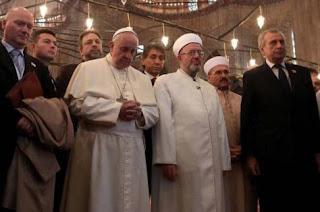 As I write this post, at least 153 people have been killed in France by Moslem terrorists. The fact they were Islamic was hardly mentioned by the left-wing media for fear of being labeled "Islamophobic" (i.e. you have a mental disorder if you despise the teachings of Islam, just as opposition to sins against nature itself will get you labeled "homophobic"). France, the erstwhile "Eldest Daughter of the Catholic Church" and home to my patron saint, King St. Louis IX, has reaped the "rewards" of ecumenism. I pray for those poor people who have gone to meet their Maker in Judgement; were they in the State of Grace, or did they even care about religion at all after the Vatican II sect destroyed the Faith?

"Pope" "Saint" John XXIII removed the words asking for the conversion of those "in the darkness of idolatry or of Islamism" from the text of the prayer for the Consecration of the World to the Most Sacred Heart of Jesus.

"Pope" "Blessed" Paul VI signed the heretical document Nostra Aetate in 1965, which proclaims in paragraph #3, "The Church regards with esteem also the Moslems. They adore the one God, living and subsisting in Himself; merciful and all- powerful, the Creator of heaven and earth, who has spoken to men; they take pains to submit wholeheartedly to even His inscrutable decrees, just as Abraham, with whom the faith of Islam takes pleasure in linking itself, submitted to God." (Emphasis mine)

"Pope" "Saint" John Paul II kissed the Koran and prayed, "May Saint John the Baptist protect Islam." Maybe he should be given the title "John Paul the Great Mohammedan."

"Pope" Benedict XVI  called for Christians "to open their arms and hearts" to Moslem immigrants and "to dialogue" with them on religious issues. Ratzinger told participants that the Catholic (sic) Church is "increasingly aware" that "inter-religious dialogue is a part of its commitment to the service of humanity in the modern world."

"Pope" Francis prayed towards Mecca and said, "Islam is a religion of peace, one which is compatible with respect for human rights and peaceful coexistence."


WAKE-UP CALL: THE TRUTH ABOUT ISLAM

1. The True Church does NOT regard Mohammedans as "worshiping the same God." Traditionalist Catholicism and Islam have competing theologies which are mutually exclusive. "Allah" is the name of a false moon "god" exalted by the false prophet Mohammed.  The psalmist tells us that  "All the Gods of the Gentiles are Devils" (Psalm 96:5) and hence to whom do they render their worship? The Scriptures tell us clearly " They provoked him by strange gods, and stirred him up to anger, with their abominations.  They sacrificed to devils and not to God: to gods whom they knew not: that were newly come up, whom their fathers worshiped not. "  (Deut 32:16- 17)

They "sacrificed to devils and not to God" - regardless of whether or not they might have believed they were rendering homage to the True God, the reality is quite the contrary! It is an erroneous proposition to qualify a prayer addressed to the devil as authentic prayer. Islam is a false religion. It does not come from God, and those who follow it lose their soul.

2. The Koran is an evil book written under demonic inspiration. Strong words? I own a copy. Here's what it teaches:

"O ye who believe!  Fight the unbelievers who gird you about, and let them find firmness in you; and know that Allah is with those who fear Him."  (Sura IX 123) Islam spread by means of violence. Catholicism spread by being persecuted and loving Her enemies along the way.

"They do blaspheme who say: 'Allah is Christ the son of Mary.'  But said Christ: 'O Children of Israel!  Worship Allah, my Lord and your Lord.'  Whoever joins other gods with Allah, Allah will forbid him the Garden, and the Fire will be his abode.  There will for the wrong-doers be no one to help."  (Sura V 75) Islam says Christians go to Hell, and Christ is not Divine; He allegedly told others to worship the false moon "god" Allah.

Also taught:
Women are inferior to men (Sura IV 34)
Men can, and even should, ‘beat’ their wives in some circumstances (Sura IV 34)
Allah does not love the unbelievers (Sura III 32)

3. The Koran Cannot Be Interpreted Peacefully

4. The Vatican II Sect Has Allowed Islam To Flourish

Gone are the days when St Francis of Assisi met Sultan Al Malik Al Kamil. The Saint told him, "If you wish to convert to Christ, and your people with you, I will most gladly remain among you out of love for Him. If you are hesitant about abandoning the law of Mohammed for the faith of Christ, order an immense fire to be lit; I will enter into it with your priests and you will see which is the surer and holier of the two creeds, and which one you must follow."  There was no "esteem" for the false religion shown, and peace was by conversion.

Gone are the days of King St. Louis IX and Pope St. Pius V who fought to keep the infidels out of Catholic Europe. Vatican II welcomed them in with "open arms," rejected Catholicism as the State religion, and NOW France decides to close its boarders when the blood of her citizens runs red in the streets from Islamic terrorists.

Gone are the days when artificial contraception, abortion, and euthanasia were banned and large families flourished. "Christian" Europe is shrinking while the Moslem hordes breed us out of existence.

We must call upon God to help us as never before. If the errors of Vatican II are not stopped soon, the bodies will pile up as Islam seeks to eradicate us, and we may see it all happen "Nostra Aetate" ("In Our Time").
King St. Louis IX, Victor over the Saracens, Pray for us!