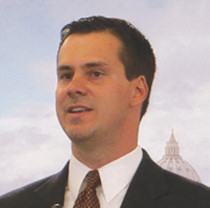 As people who read my blog will know very well, I'm no "conspiracy nut." I don't know if Mr. Salza is an actual Mason or not. One thing I do know, is that whether he's wearing an actual Masonic apron or not, his book does the work of those condemned by Pope Pius VIII (echoing the words of Pope St. Leo the Great) because their "Law is prevarication; religion, the devil; sacrifice, disgrace."
Posted by Introibo Ad Altare Dei at 3:07 AM