The Devil You Say 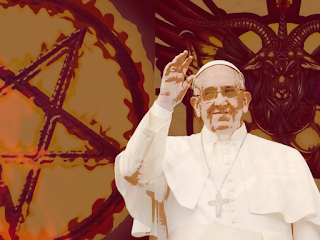 For years, the story has circulated that Giovanni Montini ("Pope" Paul VI) is alleged to have remarked that "the smoke of Satan" had entered the Vatican, and he was upset/remorseful about it. "Satanic smoke" had come in through the "open windows" of Vatican II--that "fresh air" Roncalli ("Pope" John XXIII) wanted everyone to breathe in. The satanical smoke was made worse when Montini tossed all the dogmas of the Church into the flames of Hell, to make room for his demonic Vatican II sect.

People are now bringing back the old "smoke of Satan" story in an attempt to explain the "papacy" of Francis. The Society of St. Pius X (SSPX) and other "recognize and resisters" (R&R) want to shift the blame off of Bergoglio and the false popes of Vatican II and onto a "diabolical force" that is putting the Church through some sort of "passion" akin to Our Lord. Truth be told, satanic influence is not within the Modernist Vatican; the false popes actually worship Satan--- and Lucifer himself runs the show. If you think I'm being hyperbolic or relying on some conspiracy theory taken from the pages of a Malachi Martin novel, such is not the case.


Finding "The Good" In Intrinsic Evil

According to the heretical Vatican II ecclesiology, the "Church of Christ" is not the same as the Roman Catholic Church. This entity (Church of Christ) is partially or fully present in a religion according to how many "elements" each religion has; to have all the elements like the Catholic Church is best, but to have just some elements is good too and leads to Heaven. Hence, in the Vatican II  document Nostra Aetate, we read in paragraph #2: Thus in Hinduism, men contemplate the divine mystery and express it through an inexhaustible abundance of myths and through searching philosophical inquiry. They seek freedom from the anguish of our human condition either through ascetical practices or profound meditation or a flight to God with love and trust. Again, Buddhism, in its various forms, realizes the radical insufficiency of this changeable world; it teaches a way by which men, in a devout and confident spirit, may be able either to acquire the state of perfect liberation, or attain, by their own efforts or through higher help, supreme illumination. Likewise, other religions found everywhere try to counter the restlessness of the human heart, each in its own manner, by proposing "ways," comprising teachings, rules of life, and sacred rites. The Catholic Church rejects nothing that is true and holy in these religions. She regards with sincere reverence those ways of conduct and of life, those precepts and teachings which, though differing in many aspects from the ones she holds and sets forth, nonetheless often reflect a ray of that Truth which enlightens all men.
(Emphasis mine). Pagans (Hindus and Buddhists) are therefore commendable because they have some elements of good.

What does the Church say about pagan "gods"? In Psalm 96:5, we read: " For all the gods of the Gentiles are devils: but the Lord made the heavens." Again in 1 Corinthians 10:20: "But the things which the heathens sacrifice, they sacrifice to devils, and not to God. And I would not that you should be made partakers with devils." According to theologian Prummer, in regard to pagans and heretics, "Active and formal religious co-operation is always forbidden. (Canon 1258, section 1)."

Now let's see what the post-Vatican II "popes" have done:

The import is clear: a good thing (world peace) can be effectuated by something intrinsically evil (pagan worship of demons). Can you imagine Sts. Peter and Paul inviting the pagan Romans to pray to Jupiter for world peace rather than condemning them? No? How about St. Leo the Great inviting Attila and the Huns to pray in Rome for peace instead of ordering them out of the City? Can you imagine St. Francis of Assisi praying with Mohammedans instead of telling them to accept Christ and convert?  The defenders of Vatican II will try to think that paganism is not all evil, and does not involve Satan. This is a lie.


Conclusion: Paganism and Those Who Pray with Them are Worshiping Demons

Paul VI was behind the "smoke of Satan" and it was helped along by his false pope successors. John Paul II directly worshiped with pagans and was "canonized" a "saint" by Francis. Vatican II tries to see "good" in evil as part of its heretical ecclesiology. The media also wants to push this same idea on us. Thankfully, the True Church teaching is clear. The problem is not satanic smoke, it's the doctrine of demons coming from a smiling Bergoglio.
Posted by Introibo Ad Altare Dei at 4:31 AM