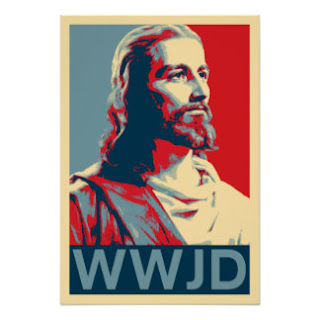 A popular sign among Protestants (as well as some members of the Vatican II sect) is the symbol "WWJD?" Present on jewelry, t-shirts, and bumper stickers, the letters stand for "What Would Jesus Do?" It sounds nice, but it's actually more Protestant private interpretation. Just as they interpret the Bible apart from the Teaching Authority of Christ's One True Church, they ask you to attempt and "read God's Mind." But God's ways are not like our ways, so who's to say what Christ would do in any given situation? Even some Traditionalists are guilty of this kind of subjectivism, when I hear them say things like, "Can you imagine Pope St. Pius X making changes in the rubrics like Pope Pius XII?" I can't read the minds of prior popes, and weren't each of them equally protected by the Holy Ghost as the Vicar of Christ on Earth?

I bring this up because last week during a conversation covering many topics, someone I know told me, "Jesus never condemned homosexuals." I asked him how he knew this, and he told me (I kid you not) he learned it  from former U.S. President Jimmy Carter, whom he described as a "theologian" who knew the Bible well. My friend, a member of the Vatican II sect, was seeking guidance from his personal knowledge of the Bible and the so-called "expertise" of  a president turned preacher. Not condemning sodomy and approving the sodomite lifestyle is allegedly an example of "doing what Jesus would do." When you turn to private interpretations, public mistakes are sure to follow. Without an infallible guide, your personal likes and dislikes are attributed to Christ; He becomes like you, rather than vice-versa as the "WWJD" would lead you to believe.

As a result, the "Jesus" many follow is One Whom:


This is an evil caricature of Jesus Christ. They (wittingly or not) have Satan as their guide. As to homosexuality, my friend told me that Jesus never mentions homosexuality and it is discussed in the Old Testament (e.g. Leviticus) but is "misinterpreted." Sodom and Gomorrah were condemned for not being hospitable, not for homosexuality.  Rather than discuss the sorry sect that is the "church of Begoglio," I decided to show how badly informed Mr. Carter was on the issue.


Sodom and Gomorrah Were Condemned for Homosexuality

The story of Sodom, told in Genesis 19, explains how Lot (Abraham's nephew) was met by two strangers at the gate of the city. These men were actually angels in disguise. Lot brings them to his house and, after a meal but before going to bed, the men of Sodom (young and old) surround the house and demand to have sex with them. Lot refuses to allow the gang rape of his guests and (tragically) offers them his virgin daughters instead. The men of Sodom are not interested in the women, only wanting sex with the men. The mob is about to break down the door of the house, when the "men" reveal themselves and save Lot by striking the mob with blindness. Revisionists tell us this is a case of attempted gang rape and  being "inhospitable" to guests, it is not "loving and consensual relations" that God would not condemn.

That Sodom was condemned for unnatural vice (later to be named after the city itself--"sodomy") is made clear by the New Testament, specifically, the epistle of St. Jude 1: 7: "In a similar way, Sodom and Gomorrah and the surrounding towns gave themselves up to sexual immorality and perversion. They serve as an example of those who suffer the punishment of eternal fire." (Emphasis mine). Doesn't leave much room for declaring "the sin of Sodom" as being a lack of hospitality.

Each time Our Lord refers to that immoral city, He refers to its sinfulness and agrees that it stands condemned:

First, Sodom was destroyed by God for it's "sexual immorality and perversion." (St. Jude 1:7)

Second, this perversion is homosexuality, because Genesis 19 clearly states it was men wanting sex with two angels who appeared as men, and they had no (sexual) use for women.

Third, Our Lord Jesus Christ is recorded referring to Sodom no less than four (4) times, and each time He agrees the city stands condemned for this sin ("sodomy") and calls Sodom "wicked."

Therefore, Jesus Christ condemned homosexuality. True, He never uses the word "homosexuality," but He never specifically condemned "rape" by name, so are we thereby to blasphemously assume He didn't condemn it? Jimmy Carter's theology is no better than his politics. Unfortunately, this did not register with my friend because "it's just your interpretation," there are other scholars who disagree with "my" interpretation, and doesn't Frankie say, "Who am I to judge"? It was getting late, I had to go and wished my friend well.

However, this encounter serves to illustrate the problem with the Vatican II sect, Protestants, and the "recognize and resist"(R&R) pseudo-Traditionalists of the SSPX and Salza/Siscoe. They don't accept an unchanging, infallible Magisterium (Teaching Authority). Protestants privately interpret the Bible to their liking, as does the Modernist Vatican and the R&R with both the Scripture and past Church teaching. If they really want to know "What Would Jesus Do?" the correct question to ask is "What Does The Church Actually Teach?"