The Church Of Oprah 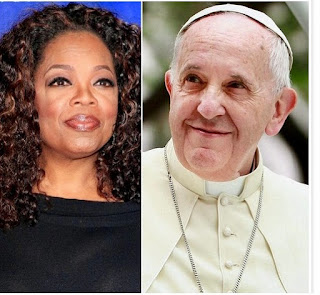 It's a truism that a person is known by the company he or she keeps. The fact that Jorge Begoglio (aka "Pope" Francis) is always with heretics, infidels and pagans and not trying to convert them, tells you he is not someone who believes in the Integral Catholic Faith. By this standard it should be understood that one of the most evil people today is the much-beloved American media proprietor, talk show host, actress, and producer Oprah Winfrey. Winfrey (b. 1954) has had enormous influence on the world through her TV talk show which began in 1986. She is credited with having helped elect abortionist, sodomite-supporter, and Communist Barak Obama as the 44th President of the United States. She has recently ruled out a run for president herself in 2020, but that's not to say she couldn't change her mind. According to Forbes magazine, she is the richest African-American in the world with a net worth of 2.8 billion dollars.

Any book Winfrey endorses seems to end up at the #1 spot on the New York Times Best Seller List. Who and what she endorses is most disturbing. She has used her influence to promote occult ideas and personalities that otherwise would have gone unnoticed. While claiming the title "Christian," Winfrey denies Our Lord and promotes evil. This post will expose her true beliefs, and the people she promotes. It is scary to think of this woman any more powerful than she is already.

Helen Schucman (d. 1981) was the author of the book A Course in Miracles, which was taught on satellite radio by Marianne Williamson with the encouragement and support of Oprah Winfrey. In October of 1965, then 56 year old Schucman, a Jewish atheist psychologist and associate professor of medical psychology at Columbia University in NYC, began receiving what she claimed were channeled messages from a "spirit guide" identifying itself as "the voice of Jesus Christ." Soon, Schucman became used to the "voice" which dictated things for her to write down. She acted as a scribe, with her hand moving in what is known as "automatic writing." Popular in occult circles this automatic writing means that the writer's hand forms the words, but the person is unaware of what will be written.

One of the most infamous "automatic writers" was Helene Smith (born Catherine Muller in 1861) who claimed her automatic writing was an attempt by Martians to communicate with Earth. She also declared that she was able to translate the "Martian Language" into French and was the reincarnation of a Hindu princess and Marie Antoinette. (See http://cabinetmagazine.org/issues/1/i_martian.php; See also https://web.archive.org/web/20110606044931/http://www.unicaen.fr/services/puc/ecrire/ouvrages/psychiatries_histoire/11psychiatries_histoire.pdf; and Occult and Supernatural Phenomena, by Donovan Rawcliffe, Dover Publications [1988], pgs. 178-186).

The result of Schucman's automatic writing was the book A Course in Miracles. The book tells us that our beliefs are unimportant. What is important is the application of the book's ideas which will bring you into a "higher form of consciousness." It further states that what is important is the inner core of our own being that unifies all religions of the world. This is a sample of what the "spirit guide" dictated to Schucman:

Some of the ideas the workbook presents you will find hard to believe, and others may seem quite startling. This does not matter. You are merely asked to apply the ideas as you are directed to do. You are not asked to judge them at all. You are asked only to use them. It is their use that will give them meaning to you, and will show you they are true.

Remember only this; you need not believe the ideas, you need not accept them, and you need not even welcome them. Some of them you may actively resist. None of this will matter, or decrease their efficacy. But do not allow yourself to make exceptions in applying the ideas the workbook contains, and whatever your reaction to the ideas may be, use them. Nothing more than that is required. (See A Course in Miracles: Text, Workbook for Students, Manual for Teachers, Glen Ellen, CA, The Foundation for Inner Peace [Reprint 1977], pg.ix).

This is pure religious indifferentism combined with a blind trust in something that will comport with all beliefs. This garbage didn't take off until it was popularized by a woman whom Oprah pushed to fame, namely, Marianne Williamson.


A Return to Paganism
Marianne Williamson (b.1952), calls herself "an American spiritual teacher" (although what qualifies her for this title remains an enigma). Her life was transformed by reading Schucman's Course. Williamson's first book, A Return to Love, is a popular exposition of A Course in Miracles. The original book by Schucman contains a lesson for everyday, or 365 "lessons" per calendar year. Winfrey pushed Williamson's book on her TV show in 1992, the year of its publication, and it spent 39 weeks on the New York Times Best Sellers List. Williamson then began to teach her lessons, based on those of Schucman, on XM radio to even more millions of people.

Here are some of the "life lessons to be learned" from Marianne Williamson:
These "lessons" are pure blasphemy from the father of lies himself. A single Jewish mother (who refuses to identify the father of her child), Williamson used to run a "metaphysical bookshop" (occult themes, not philosophy) before Oprah catapulted her to fame and fortune. Williamson is therefore not unacquainted with the demonic, and actually calls herself a witch:

During the wee hours of the morning, both angels and demons take shape...In those hours that I've lain so inconveniently awake, I think I've begun to know at last what awakened means. Noting the witching hour---4:15---at which I awake more often than not, stealing outside to look at the stars and marvel at the moon, I return again to my ancient self. In those hours, I am not a menopausal nutcase, I'm a magical witch, and I can feel it in my bones. (See Williamson's book The Gift of Change, San Francisco, HarperCollins, [2004], pg. 244; Emphasis mine).

This woman, and the teachings of Schucman would never have ensnared so many people had it not been for Oprah Winfrey.


Oprah and the Vatican II Sect

Oprah has made many friends in the Vatican II sect, and pushes the work of "Fr" Richard Rohr (b. 1943) a proponent of the evil "Enneagram" (See my post http://introiboadaltaredei2.blogspot.com/2016/10/jung-and-restless.html for more on that subject). Rohr pushes many heretical and immoral positions:

Not surprisingly, there is nothing "Catholic" about the "priest" Oprah endorses; it is more occultism and Modernism.  Consider Oprah's own words:

When a lady in her audience asked, "What about Jesus?"  Oprah defiantly answered her by repeating the question, "What about Jesus?" Oprah went on to explain how she had been a Baptist until she heard a charismatic Pastor make the statement that God was a jealous God.  She told her viewers in her opinion God was simply love and God being described as a Jealous God made her really stop and think.

On another occasion she stated:


One of the biggest mistakes humans make is to believe that there is only one way. Actually, there are many diverse paths leading to what you call God.

Yet another "gem" from Ms. Winfrey:

Well, I am a Christian who believes that there are certainly many more paths to God other than Christianity.


In 2015, Bergoglio, upon visiting the U.S., sought advice on  "the Church’s portrayal in Western entertainment" from Oprah Winfrey and movie actor Matt Damon. Is it any wonder Bergoglio, who submits to and promotes the pagan "Reiki healing" would seek advice from this equally pagan woman? Oprah Winfrey has consistently pushed a pagan worldview while claiming the title "Christian" and donating generously to charity. Many are fooled who forget what Our Lord said, "The poor you will always have with you,but you will not always have Me." (St. Matthew 26:11). The purpose of this life is to save our soul. "For what shall it profit a man, if he gain the whole world, and suffer the loss of his soul?" (St. Mark 8:36).

Winfrey has pushed many pagan ideas and personalities upon the world. A full listing would take another post; I didn't even mention Rhonda Byrne, author of the pagan (and very popular) book The Secret. Beware should she attempt a run for president; I shudder at the thought of "President Winfrey" and her occult driven Cabinet members. Upon meeting Bergoglio, Winfrey had this to say to "Pope" Francis: "Your Holiness (sic) I wanted to take a moment to extend my warmest welcome to you. I hold your life and work in the highest esteem. (Emphasis mine). Need any more be said?


Posted by Introibo Ad Altare Dei at 2:11 AM