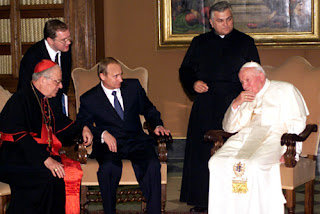 "St." John Paul the Great (Apostate) is continually lauded by the so-called conservative members of the Vatican II sect for two reasons; his stance against abortion and his anti-Communism. It's true he towed the line regarding the Church's teaching on abortion. Wojtyla was an actor, and what a great act he put on for those who didn't understand the Faith, yet desperately wanted to believe "the essentials" hadn't changed after Vatican II. Unfortunately, no one stopped to realize that abortion reached catastrophic proportions precisely because Wojtyla simultaneously helped push for the removal of Catholicism as the State religion. Countries that never had legal abortion (Belgium, Ireland, Spain, etc) fell as part of the "culture of death" once the influence of Catholicism was gone. After all, the "Church of Christ" subsists in all sects as Vatican II teaches.

As to Communism, Wojtyla is wrongfully regarded as its foe. There is much in his heretical teachings that went against true Church teaching on the evils of Marxism in all its forms. This post will expose the capitulation to Socialist and Marxists tenets by a  "saint" of the Vatican II sect.

Is The Social Doctrine of the Church "The Soul of Marxism"?

In 1993, JPII made the following remarks:
The conditions that gave rise historically to this system [Marxism] were very real and serious. The system of exploitation, to which inhuman capitalism had submitted the proletariat since the beginning of the industrial revolution, represented a true iniquity that the social doctrine of the Church openly condemned. At depth, the latter [Church social doctrine] was the soul of truth of Marxism, thanks to which it can present itself in a fascinating way in Western societies themselves. (See L'Osservatore Romano, September 11, 1993; Emphasis mine) Here, "St." Wojtyla calls Church social teaching "the soul" of the demonic system of Karl Marx. What can you expect from a man who praises the Communist Manifesto in one of his "encyclicals"? Yes, you read that correctly. In 1981, JPII wrote Laborem Exercens, and in section #8 we read:

It was precisely one such wide-ranging anomaly that gave rise in the last century to what has been called "the worker question", sometimes described as "the proletariat question."  This question and the problems connected with it gave rise to a just social reaction and caused the impetuous emergence of a great burst of solidarity between workers, first and foremost industrial workers. The call to solidarity and common action addressed to the workers-especially to those engaged in narrowly specialized, monotonous and depersonalized work in industrial plants, when the machine tends to dominate man - was important and eloquent from the point of view of social ethics. It was the reaction against the degradation of man as the subject of work, and against the unheard-of accompanying exploitation in the field of wages, working conditions and social security for the worker. This reaction united the working world in a community marked by great solidarity...Following the lines laid dawn by the Encyclical Rerum Novarum...it must be frankly recognized that the reaction against the system of injustice and harm that cried to heaven for vengeance and that weighed heavily upon workers in that period of rapid industrialization was justified from the point of view of social morality.(Emphasis mine)

Without mentioning the Communist Manifesto, JPII clearly agrees with its cry, "Proletarians of the whole world unite." Wojtyla mentions the great Pope Leo XIII, in my opinion one of the holiest and most underrated popes of all time, as supporting this view by "following the lines" he laid down. Pope Leo XIII was a theological giant; did he lay the foundation for Wojtyla's teaching? Hardly. Here's what that great pontiff taught in Quod Apostolici Muneris:

You understand, venerable brethren, that We speak of that sect of men who, under various and almost barbarous names, are called socialists, communists, or nihilists, and who, spread over all the world, and bound together by the closest ties in a wicked confederacy, no longer seek the shelter of secret meetings, but, openly and boldly marching forth in the light of day, strive to bring to a head what they have long been planning - the overthrow of all civil society whatsoever.(#1)

Hence, by a new species of impiety, unheard of even among the heathen nations, states have been constituted without any count at all of God or of the order established by Him; it has been given out that public authority neither derives its principles, nor its majesty, nor its power of governing from God, but rather from the multitude, which, thinking itself absolved from all divine sanction, bows only to such laws as it shall have made at its own will. The supernatural truths of faith having been assailed and cast out as though hostile to reason, the very Author and Redeemer of the human race has been slowly and little by little banished from the universities, the lyceums and gymnasia-in a word, from every public institution. (#2)

For, indeed, although the socialists, stealing the very Gospel itself with a view to deceive more easily the unwary, have been accustomed to distort it so as to suit their own purposes, nevertheless so great is the difference between their depraved teachings and the most pure doctrine of Christ that none greater could exist: "for what participation hath justice with injustice or what fellowship hath light with darkness? (#5; Emphasis mine)

Christian tradition has never upheld this right [to private property] as absolute and untouchable...
As mentioned above, property is acquired first of all through work in order that it may serve work. This concerns in a special way ownership of the means of production. Isolating these means as a separate property in order to set it up in the form of "capital" in opposition to "labor"-and even to practice exploitation of labor-is contrary to the very nature of these means and their possession. They cannot be possessed against labor, they cannot even be possessed for possession's sake, because the only legitimate title to their possession- whether in the form of private ownership or in the form of public or collective ownership-is that they should serve labor, and thus, by serving labor, that they should make possible the achievement of the first principle of this order, namely, the universal destination of goods and the right to common use of them.  From this point of view, therefore, in consideration of human labor and of common access to the goods meant for man, one cannot exclude the socialization, in suitable conditions, of certain means of production. (#14)

Compare Pope Pius IX in Qui Pluribus:
To this goal also tends the unspeakable doctrine of Communism, as it is called, a doctrine most opposed to the very natural law. For if this doctrine were accepted, the complete destruction of everyone’s laws, government, property, and even of human society itself would follow. (Emphasis mine).

Pope Leo XIII in Rerum Novarum:
Hence, it is clear that the main tenet of socialism, community of goods, must be utterly rejected, since it only injures those whom it would seem meant to benefit, is directly contrary to the natural rights of mankind, and would introduce confusion and disorder into the commonweal. The first and most fundamental principle, therefore, if one would undertake to alleviate the condition of the masses, must be the inviolability of private property. (#15; Emphasis mine)

Furthermore, the social teaching of the Vatican II sect no longer held that work can be set in confrontation with capital or detached from it as an independent factor or aspect on the very level of production itself. Rerum Novarum  of Pope Leo had taught: "Neither capital can subsist without labor, nor labor without capital. (#14). Now we are taught instead:

This consistent image, in which the principle of the primacy of person over things is strictly preserved, was broken up in human thought. The break occurred in such a way that labor was separated from capital and set in opposition to it, and capital was set in opposition to labor, as though they were two impersonal forces, two production factors juxtaposed in the same "economistic perspective." (Laborem Exercens, 13].

In a 1993 interview with Jas Gawronski, JPII said, "If present day capitalism is improved, it is in great part because of the good things realized by communism: the fight against unemployment, concern for the poor. Capitalism, on the other hand, is individualistic." (See http://chiesa.espresso.repubblica.it/articolo/6975%26eng%3Dy.html?refresh_ce; Emphasis mine)

Conclusion
Although no one needs to accept private revelations, I do believe in the Church-approved apparition of Our Lady of Fatima. She warned us that "Russia would spread her errors." Wojtyla has done exactly that. Using the heretical Modernist ideology of the Robber Council Vatican II (at which Archbishop Wojtyla was a huge Modernist ideologue), he systematically pushed for the removal of Catholicism as the State religion. While posturing as anti-Communist, he reversed the social teachings of the true popes (especially Pope Leo XIII) in subtle ways so as to weaken opposition to socialism and Communism. To speak of "the good things realized by Communism" is insanity, no less than if it were said that having fewer people for whom to care is because of the "good things realized by genocide and abortion."

Bergoglio has sold out to Beijing, and even "Cardinal" Zen of Hong Kong criticized the Modernist Vatican of forcing "bishops" to retire in favor of overt Communists picked by the Chinese Communist Party. We have a "Communist saint" in Oscar Romero. Pope Pius XI taught in his great Encyclical Quadragesimo Anno, "No one can be at the same time a sincere Catholic and a true Socialist." Nor can a socialist-Communist pushing prelate from Poland be a pope or a saint.

Posted by Introibo Ad Altare Dei at 1:35 AM