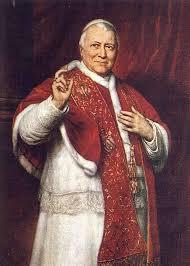 Most "conservatives" in the Vatican II sect are (ironically) ignorant of invincible ignorance, and what it means in relation to God's plan of salvation.  Their warped ideas come from the heretical ecclesiology contained in the Vatican II document Lumen Gentium. In paragraph number 8, we read: "This Church [the Church of Christ], constituted and organized as a society in the present world, subsists in the Catholic Church, which is governed by the successor of Peter and by the bishops in communion with him. Nevertheless, many elements of sanctification and of truth are found outside its visible confines. Since these are gifts belonging to the Church of Christ, they are forces impelling towards Catholic unity." (Emphasis mine).

The "conservative" defenders of the Vatican II sect will protest that Lumen Gentium upholds EENS in paragraph number 14. It states: "Hence they could not be saved who, knowing that the Catholic Church was founded as necessary by God through Christ, would refuse either to enter it, or to remain in it." (I will return to this sentence later). In paragraph number 16, it declares, "Those who, through no fault of their own, do not know the Gospel of Christ or his Church, but who nevertheless seek God with a sincere heart, and, moved by grace, try in their actions to do his will as they know it through the dictates of their conscience--those too many achieve eternal salvation." The text cites to the letter of the Supreme Sacred Congregation of the Holy Office Suprema Haec Sacra [1949] to the Archbishop of Boston regarding the errors of Fr. Leonard Feeney who denied Baptism of Desire (BOD) and Baptism of Blood (BOB). It is interesting that the letter does not expound the Catholic teaching on BOD and BOB as fully and comprehensively as other sources which the Robber Council simply ignored.

In response to their defense of Lumen Gentium, I can easily point out glaring departures from EENS, such as in paragraph number 16 where it teaches "... the plan of salvation also includes those who acknowledge the Creator, in the first place amongst whom are the Moslems: these profess to hold the faith of Abraham, and together with us they adore the one, merciful God, mankind's judge on the last day." God's plan of salvation includes the followers of the murderous madman Mohammed? Worshiping the false moon god "Allah" is the same as the Triune God of Catholicism? I could go on, but the purpose of my post is to bring to light the false ideas held by "EWTN" types in the Vatican II sect, who give a heretical interpretation to invincible ignorance based on the above cited sentence from Lumen Gentium: "Hence they could not be saved who, knowing that the Catholic Church was founded as necessary by God through Christ, would refuse either to enter it, or to remain in it."


Those Who Know Nothing About Ignorance

From the sentence cited in Lumen Gentium, the V2 sect apologists reason as follows: No one can be damned for not joining the Catholic Church unless the failure to join is deliberate. The Church teaches that all who do not join Her are damned. Therefore, "Outside the Church No Salvation" only applies to those who recognize the Catholic Church as the True Church and then deliberately refuse to join Her. Now if you apply this totally false and heretical idea and label it "invincible ignorance," you have completely eviscerated EENS. There are two necessary factors for being "outside the Church:" First, you must explicitly know that the Catholic Church is the One True Church, and having this knowledge, you nevertheless (out of human respect, fear, or whatever motive) refuse to join Her.

It doesn't take a rocket scientist to realize that large numbers of people have no knowledge of the Catholic Church, or don't realize Catholicism is the true religion, due to factors they can't overcome (like poor Chinese pagans who don't know any better and have never heard of Catholicism in many cases. I won't even discuss those who mistake the Vatican II sect for the Catholic Church). Add to the mix Lutherans living in Scandinavian countries, and since they were surrounded by non-Catholics, they had no way to understand the Catholic Church is the One True Church. Hence, nearly all the world is saved.  Feeneyites will rightfully condemn this heresy, but then they go on to reject the true teaching on invincible ignorance as taught by Pope Pius IX. The heretical implications of the V2 sect apologists are:

1. The Divine and Catholic Faith are not always necessary for salvation.

2. Those who are not deliberately outside the Church because of ignorance, and those who fail to recognize Her as the One True Church, will ipso facto be united to Her through BOD.

3. There is a "presumption of salvation" for non-Catholics. This comes directly from Vatican II which discussed Moslems as a whole (and many other false sects) as being "in the plan of salvation."

The Teaching of the Church
I) Outside the One True Church, There is no Salvation

"There is one universal Church of the faithful, outside of which no one at all can be saved." Pope Innocent III, ex cathedra, (Fourth Lateran Council, 1215).

"We declare, say , define, and pronounce that it is absolutely necessary for the salvation of every human creature to be subject to the Roman Pontiff." Pope Boniface VIII, (Unam Sanctam, 1302).

"The Most Holy Roman Church firmly believes, professes and preaches that none of those existing outside the Catholic Church, not only pagans, also Jews, heretics, and schismatics can ever be partakers of eternal life, but that they are to go into the eternal fire 'which was prepared for the devil and his angels' (Mt. 25:41) unless before death they are joined with Her... No one, let his almsgiving be as great as it may, no one, even if he pour out his blood for the Name of Christ can be saved unless they abide within the bosom and unity of the Catholic Church." Pope Eugene IV (Cantate Domino, 1441).

CONDEMNED PROPOSITION 17. Good hope at least is to be entertained of the eternal salvation of all those who are not at all in the true Church of Christ.

The position of the Church is clear.

II) Ignorance does NOT save you
In his Allocution Singulari Quadem [1854], Pope Pius IX teaches, "On the other hand it is necessary to hold for certain that ignorance of the true religion, if that ignorance be invincible, is not a fault in the eyes of God."

As theologian Fenton teaches, "He [Pope Pius IX] stated simply that God will blame no man for invincible ignorance of the Catholic Church, any more than He will blame anyone for invincible ignorance of anything else...non-appurtenance to the Catholic Church is by no means the only reason why men are deprived of the Beatific Vision. Ultimately, the only factor that will exclude a man from the eternal and supernatural enjoyment of God in Heaven is sin, either Original or mortal." (See The Catholic Church and Salvation In the Light of Recent Pronouncements of the Holy See, [1958], pgs. 45-46).

The same holy Pontiff, in his encyclical Quanto Conficiamur Moerore [1863], teaches:
Here, too, our beloved sons and venerable brothers, it is again necessary to mention and censure a very grave error entrapping some Catholics who believe that it is possible to arrive at eternal salvation although living in error and alienated from the true faith and Catholic unity. Such belief is certainly opposed to Catholic teaching. There are, of course, those who are struggling with invincible ignorance about our most holy religion. Sincerely observing the natural law and its precepts inscribed by God on all hearts and ready to obey God, they live honest lives and are able to attain eternal life by the efficacious virtue of Divine light and grace. Because God knows, searches and clearly understands the minds, hearts, thoughts, and nature of all, his supreme kindness and clemency do not permit anyone at all who is not guilty of deliberate sin to suffer eternal punishments. Also well known is the Catholic teaching that no one can be saved outside the Catholic Church. (para. #7 and 8; Emphasis mine).

First, who are those that Pius IX indicates "may be saved" despite (not because of) invincible ignorance? Certainly not all who are invincibly ignorant as "conservative" V2 sect members seem to think. There are several stringent requirements. The person must:


If a person meets these requirements, is he/she assured of salvation? In a word: No. They need "Divine light and grace." What does this mean? God can, before death, enlighten the mind by infusing the basic truths of Faith and imbue sanctifying grace in the soul. The person thereby is within the Church with grace and can be saved. St Thomas Aquinas in De Veritate, question 14, article 11, discusses whether it is necessary to have explicit Faith to be saved. The Angelic Doctor answers in the affirmative, and this comports with implicit faith being changed to explicit Faith by Divine Light. Aquinas teaches:

"For if anyone thus brought up [someone raised in the woods or among brute animals] were to follow the guidance of natural reason in seeking good and shunning evil, it must be held most certainly that God would reveal to him even by an internal inspiration those things which are necessary to be believed, or would direct some preacher of the Faith to him, even as He sent Peter to Cornelius (Acts 10). (Emphasis mine).  Hence, theologian Lacroix teaches that "...the faithlessness of those who have heard nothing of the Faith [not even by internal inspiration]...is not a sin, but the penalty of sin; because if they had done what lay within their power, God would not have concealed the faith from them." (See Theologia Moralis, De Fide, cap. 5, dub 1).

Conclusion
The Vatican II sect exalts ignorance as a condition that automatically saves you. Nothing could be more wrong and wicked. Ignorance, even when invincible and thereby inculpable, does not save anyone. If that were the case, the Church should not carry out the Great Commission by sending missionaries, because if you leave someone in invincible ignorance they will be saved, but if you tell them the truth and they reject it they will be damned. You thereby put non-Catholics in a potentially worse position by preaching to them.

If someone in invincible ignorance meets many stringent requirements, it is possible that God can bring him into the Church through BOD before death. It is a rare miracle of grace. Therefore, we must pursue the Great Commission with full vigor. Just as God has miraculously allowed certain saints to survive by ingesting nothing but the Holy Eucharist, we can't take a rare miracle like that and use it to justify not feeding the poor because "God can feed them by a miracle." We must follow Church teaching on invincible ignorance and all other matters, avoiding both denial of God's saving work (Feeneyites), and professing universal salvation via ignorance (Vatican II sect).

Posted by Introibo Ad Altare Dei at 3:27 AM