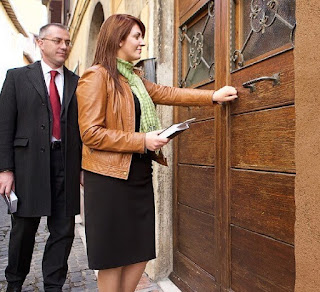 This is the next installment of my series to be published the first Monday of each month.

There are members of false sects, like Jehovah's Witnesses, that come knocking door-to-door hoping to convert you. Instead of ignoring them, it is we who should try and convert them. In 1 Peter 3:16, our first Pope writes, "But in thy hearts revere Christ as Lord. Always be prepared to give an answer to everyone who asks thee to give the reason for the hope that thou hast. But do this with gentleness and respect,..." Before the Great Apostasy, the Church would send missionaries to the ends of the Earth to make as many converts as possible.

Those in false religions don't always come (literally) knocking at your door. It may be a Hindu at work who wants you to try yoga. It could be a "Christian Scientist" who lives next door and invites you to come to their reading room. Each month, I will present a false sect. Unlike the Vatican II sect, I do not see them as a "means of salvation" or possessing "elements of truth" that lead to salvation. That is heresy. They lead to damnation, and the adherents of the various sects must be converted so they may be saved.

In each month's post, I will present one false sect and give an overview of:

The quintessential "all religions are equal" sect is the Unitarian Universalists (hereinafter "UU"). If you should ever walk into one of their "Congregation Halls," it looks like an empty Veterans of Foreign Wars (VFW) hall with folding chairs. The walls are usually white, and there is a small stage with an American flag and a podium. The place is devoid of all religious symbolism except for "The Flaming Chalice" (see picture above) usually displayed on the wall behind the podium. There is an actual "chalice" with a candle in it which they light during their services. Even The Flaming Chalice (both symbol and the physical object) is not always depicted the same way, and there is no officially sanctioned explanation as to what, exactly, it means. According to the UU website:

As to the meaning, a pamphlet on "The Flaming Chalice, " by one Susan J. Ritchie informs us:

It suggests the transformations that take place when we are held within religious community. When we light the chalice in worship, we illuminate a world that we feel called upon to serve with love and a sense of justice. (Whatever that means).  As I was researching the UUs, I couldn't help but think that in a few years this is exactly what the Vatican II sect will become. If you can grasp the concept (hard to do at first), they are committed to having no commitments, and believe that beliefs don't matter. The history of this amalgamation of self-contradictions will be examined first.

A Union of Heretical Teaching
Unitarianism is the heretical belief that arose after the Protestant so-called "Reformation" that God is not One in Three Divine Persons (The Most Holy Trinity). Rather, it adopts a Judaic or Islamic view of God being One. They reject Christ as God Incarnate, and the Holy Ghost is usually seen as an impersonal force. There are various sects that can be labeled as "unitarian" (with a lower case "u") because they teach the same about the nature of God (e.g. the Jehovah Witnesses). Unitarians (with a capital "U") come from the 16th century movement just described, and which spread first to England, and then the United States of America.

Universalism is the heretical belief that every person will be saved. The early Church Father, Origen, believed in apocatastasis, the ultimate restoration and reconciliation of creation with God, which was interpreted by Universalists to mean the salvation and reconciliation with God of all souls which had ever existed, including Satan and his demons. The Church condemned Origen for this heresy. The Universalist movement died out, but was revived in the 18th century, especially in England. In the early 20th century, the sect came to the United States.

In America, the two groups became cordial to one another, as they shared many beliefs and attitudes. The two groups merged officially in 1961, forming the Unitarian Universalist Association. When speaking of themselves, UUs frequently refer to themselves as simply "Unitarians" for short.

A Sect Devoid of Theology
UU has adopted the "least common denomination" approach to theology. They espouse theological pluralism, as they became more and more adrift from anything even remotely resembling Christianity. It makes it extremely difficult to give an exposition of their worldview. They are without an official creed, having adopted The Seven Principles by which they operate. According to UU headquarters in Boston, these principles are "...drawn from sources as diverse as science, poetry, scripture, and personal experience."
Each congregation elects its own Board of Directors, and they work together. However, they are not hierarchical in any way, and are not bound to follow what their Boston headquarters proposes (although all congregations do, in fact, choose to accept the Seven Principles).

Their clergy may be male or female and are called by the title "Reverend." Most of the clergy is female. They are elected by the congregation, and usually have some schooling in how to be politically correct and not offend anyone (I'm not being sarcastic). Once more, UU headquarters states the Seven Principles are
Jewish and Christian teachings which call us to respond to God's love by loving our neighbors as ourselves; Humanist teachings which counsel us to heed the guidance of reason and the results of science, and warn us against idolatries of the mind and spirit; Spiritual teachings of Earth-centered traditions which celebrate the sacred circle of life and instruct us to live in harmony with the rhythms of nature. (See https://www.uua.org/beliefs/what-we-believe/sources).

The typical "worship service" (I'd like to know who the atheists are worshiping) consists of child-like, non-denominational hymns (Think: Michael Row the Boat Ashore with the Most Holy Name of Jesus, and the word "Lord" redacted and replaced with something secular and "non-offensive"). There will then be the lighting of The Flaming Chalice and a sermon given by the feminist reverend. Said sermon will tell everyone that there may or may not be an afterlife, so concentrate on bettering the environment, supporting the most left-wing fringe elements of the Democratic Party, and if there was such a person as the Antichrist, it's President Donald Trump. (Once more, a friend of mine attended a service of the UU out of curiosity not too long ago. It's basically what really happened).

The average UU is either a baby-boomer or a millennial from a relatively wealthy background. They reject authority and don't like to be told what to do. Ironically, the want the government to control everything. Being a UU allows them to "Do as thou wilt," while feeling "spiritual." In the 1990s, they began to try and convert people to form a "one world faith" that will bring "universal peace and justice." Hence, you may be invited to a Sunday service so you can (allegedly) keep your own beliefs while following the Seven Principles to make the Earth a better place to live. Here are some general rules when engaging a UU:

1. Ask what they personally believe. Find out where they stand ideologically. UUs are all over the place. You could be talking to an atheist or a feminist pagan. It is important to find out what they believe so as to point out the inconsistencies and internal contradictions of their beliefs when combined with the UU membership.

2. The UU attack on exclusivistic religious beliefs is self-refuting and illogical. Show them.
3. They use broad terms that sound nice, but have no real meaning apart from Christianity.
4. Beliefs in the UU are mutually exclusive; they cannot possibly work together or pray together.
Conclusion
Unitarian Universalism is a mass of self-refuting, contradictory beliefs. It started when two heterodox offshoots from Protestantism merged in the United States back in 1961. Adopting the liberal religious pluralism and Indifferentism of its surroundings, it seeks to unite all beliefs and no beliefs (atheism) under their Seven Principles; nice sounding statements that can have no application in the practical order. UU allows people to stay as they are without having to change their behaviors or beliefs so they can feel "spiritual."

Doesn't this sound like where the Vatican II sect will be in about ten years? They have creeds and rules that no one needs to obey in the practical order. They see all religions as having "elements" of the Church of Christ and are a "means of salvation." The R&R is, in a sense, already there. As long as you "recognize" Bergoglio, you can accept or reject what you like. You can attend the Novus Bogus and accept the new ecclesiology, or attend the Traditional Mass and reject the new ecclesiology. To do the latter is better, but if you do the former, you're "still Catholic." I shudder and think, "Can the One World Religion with the false prophet predicted in the Book of the Apocalypse be far behind?"

Posted by Introibo Ad Altare Dei at 12:49 AM