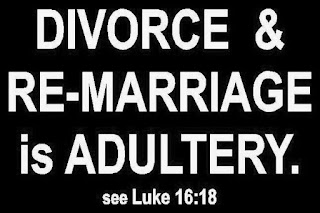 "Pope" Francis will soon issue his contribution to the fray he began concerning giving Vatican II "communion" to the divorced and remarried (i.e., adulterers). According to The Wall Street Journal, "Last year, a church-funded council of lay Germans proposed in a public resolution that priests be allowed to bless same-sex couples. The bishops didn’t take the suggestion, but more and more priests are doing so. 'If a gay couple came to me and asked me for a blessing, I would give them a blessing of course,' said the Rev. Raimund Blanke, pastor of a parish in Bonn [Germany]." A person must realize that sin just doesn't have one consequence, but many. Heresy in one area will rarely, if ever, confine itself there. If adulterers can receive "communion," why not sodomites? The problem with "communion" (thank God the Vatican II sect doesn't have True Communion!) for adulterers is the numerous ways it violates the Law of God. A brief examination is in order:


The Reality of Sin and The Evil of Divorce

A mortal sin is any serious and willful thought, word, deed or omission against the Law of God done with full knowledge of its wrongfulness. Mortal sin robs the soul of Sanctifying Grace and makes one an enemy of God and worthy of Hell, unless forgiven and repented of prior to the moment of death. "If the just man turn himself away from his justice and do iniquity... all his justices which he hath done shall not be remembered" (See Ez.18:24). Once a marriage has been ratified and consummated, the man and woman are married for life, and only death itself can break the marital bond. Hence, to divorce and "remarry" is adultery."It is a bond which is by nature indissoluble and exclusive of every other marriage bond." (See theologian Jone, Moral Theology, Newmann Press, [1962], pg. 532).

Divorce and "remarriage" are wrong in many ways. First and foremost it violates the Sixth Commandment, "Thou Shalt Not Commit Adultery."  "Know you not that the unjust shall not possess the kingdom of God? Do not err: neither fornicators, nor idolaters, nor adulterers, Nor the effeminate, nor liers with mankind, nor thieves, nor covetous, nor drunkards, nor railers, nor extortioners, shall possess the kingdom of God." (See 1 Corinthians 6: 9-10; Emphasis mine).  In addition, have you considered the other evil aspects of divorce and remarriage?

Any attempt to give "communion" (although invalid) to adulterers in the Vatican II sect will mask a horrible evil as "no big deal." If marriage is no big deal, why the fuss over sodomite "marriage"? Why bother with marriage at all? People with any Catholic sense left will see it erode away. The Argentinian apostate, Jorge Bergoglio, has been divorced from Christ for years. Now, he wishes to drag our already falling apart society further away from God by trying to persuade people that you can say "I do" to his nefarious plan.