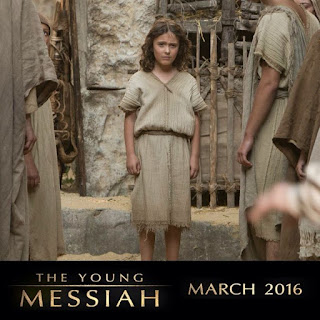 This past Friday, in the middle of Lent, a motion picture debuted entitled The Young Messiah. The movie portrays the life of a seven-year-old Jesus Christ. Before wasting your money, I'm warning my readers to stay away. Contrary to what the Vatican II sect wants you to think, this is not a family movie about Christ. You know a religious movie is good when Frankie's mitered morons condemn it (think: The Passion of the Christ). The movie is insidious in both its origin and its depiction of Our Lord.

The film is based on a book by author Anne Rice called Christ the Lord: Out of Egypt. Rice is best known for her series of books dealing with vampires ("The Vampire Chronicles" series--also made into two major motion pictures; Interview with the Vampire and Queen of the Damned). Anne Rice was born Howard Allen Frances O'Brien on October 4, 1941. She was indeed a girl named after her father. Rice became known as "Anne" and legally changed her name. She was raised as a devout Catholic, but renounced the Faith for atheism at age 18. Two years later, she married Stan Rice and had two children. Their daughter Michele died at age six from childhood leukemia, and their son Christopher (b. 1978) is himself an author and an avowed homosexual activist. Rice published works of erotica, and loved all things occult.

In 1998, Rice returned to "Catholicism" (read: "Vatican II sect") and wrote books about Christ. She was unable to shake her occult fascination, and the books were based on the so-called "Gnostic Gospels" which claim to be by same famous disciple and profess to reveal some part of Christ’s life, but are in fact rejected by the Church as inauthentic (for many and good reasons). The Gnostic heretics believed that salvation is not through Christ and His One True Church, but through secret knowledge. They also acknowledge there are two "gods"--one who made the physical world, and the other good "god" who wants us to escape the material world. To find the truth you do not look for external revelation, but within yourself for the "spark of the divine."  Some of the most famous of these false "gospels" are the "Gospel of Thomas" and the "Gospel of Mary Magdalene." The book and movie are therefore based off this occult teaching.

As of 2013, she identifies herself as a "secular humanist."

A Gnostic "Christ"
Conclusion: Stay Away

This movie insults and denigrates Our Lord Jesus Christ and replaces Him with a Gnostic counterfeit that doesn't know who he is and behaves in ways that God could not, as He is all-perfect.  The Vatican II sect believes otherwise. Here's what so-called conservative "Archbishop" Charles Chaput of Philadelphia had to say, "A portrait true to biblical faith but without sentimentality….an exceptional movie, engaging from start to finish; a film worth seeing and owning and seeing again." (Emphasis mine).  "Cardinal" Sean O'Malley of Boston said, "Captivating, inspiring, and deeply moving."  But perhaps the most revealing review was given by "Archbishop" Wenski of Miami, "Opens a door into your heart." Indeed. A door in which you might let in the heresy of the Gnostic "Christ" and the demonic occultism that spawned him. Stay away.

Posted by Introibo Ad Altare Dei at 4:06 AM