Miracles And The Modern Mind 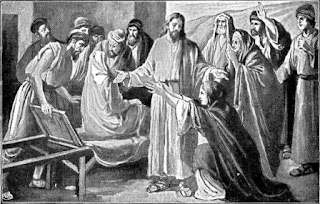 Nothing will generate more smiles and snickering among the educated people of today than expressing belief in miracles. The Modernists of the Vatican II sect, having subscribed to naturalism, reject the supernatural. Atheism and agnosticism alike breed contempt for any notion of the supernatural as well. Modernist Bible scholars consider the miracles of Sacred Scripture to be mere myths that can be explained away. Christ didn't really feed five thousand people with five loaves of bread and two fish. This is merely a myth to show that God provides (so they assure us).

It's no wonder that the modern world rejects miracles as superstitious fables. Not helping the situation are expressions which misuse the word miracle, e.g., "It's a miracle I made it to work today;" "Life is a miracle." There are also people who, while well meaning, ascribe miracles when none exist seeing them in any fortuitous set of circumstances. This post will set forth Church teaching on miracles, as well as responses to the modern minds who reject them.


The Church's Teaching On Miracles
1. Miracles are an effect wrought in nature by the direct intervention of God. They are proofs of the truth of the Catholic religion.

Proof: From the Oath Against Modernism promulgated by Pope St. Pius X for all clerics on September 1, 1910:

"Secondly, I accept and acknowledge the external proofs of revelation, that is, divine acts and especially miracles and prophecies as the surest signs of the divine origin of the Christian religion and I hold that these same proofs are well adapted to the understanding of all eras and all men, even of this time." (Emphasis mine)

"If anyone shall say that miracles are impossible, and therefore that all the accounts regarding them, even those contained in Holy Scripture, are to be dismissed as fables or myths; or that miracles can never be known with certainty, and that the divine origin of Christianity cannot be proved by them; let him be anathema."

2. While we must believe in miracles (especially those contained in the Holy Bible), we are not bound to believe in every specific event claimed to be miraculous. We should only give credence to those events considered miracles by the authority of the Church.

Proof: Many events thought to be miraculous were denied as such by the Magisterium of the Church prior to the defection of the hierarchy at Vatican II.


3. Miracles cannot be used to help give credibility to that which is false. Any "miracle" that does so is either (a) naturally explained, and therefore not a miracle, or (b) of demonic origin.

Proof: A miracle is a deed that is sensible, extraordinary, and of divine origin. Hence, since transubstantiation is not sensible, it cannot be considered a miracle in the strict sense. Miracles can only be used to support that which is true and good. It is impossible for God to deceive. Moreover, God would equivalently be producing falsehood if He were performing some miracles in order to demonstrate that some false doctrines or a doctrine that is altogether human has been revealed by Himself. We should recognize that God allows extraordinary things to be performed by the devil. (See theologian Tanquerey, A Manual of Dogmatic Theology,Desclee Company, [1959], 1:40-45; Emphasis mine)

The Lord said to Moses and Aaron, "When Pharaoh says to you, 'Perform a miracle,' then say to Aaron, 'Take your staff and throw it down before Pharaoh,' and it will become a snake." So Moses and Aaron went to Pharaoh and did just as the Lord commanded. Aaron threw his staff down in front of Pharaoh and his officials, and it became a snake. Pharaoh then summoned wise men and sorcerers, and the Egyptian magicians also did the same things by their secret arts: Each one threw down his staff and it became a snake. But Aaron’s staff swallowed up their staffs. Yet Pharaoh’s heart became hard and he would not listen to them, just as the Lord had said." (Emphasis mine).


Modern Objections to Miracles and Responses

The three main objections to miracles are a denial that:
Since those who deny miracles do not heed the teaching of the Church, my replies will be based on reason. In brief, I would reply:
Let me be clear that I'm not positing the existence of God to prove miracles, and then using miracles to prove God (fallacious and circular reasoning). If someone believes in the existence of the traditional concept of God, the possibility of miracles, and the ability to ascertain them logically follow. What of those who don't believe in God or the Christian (True) God? The Vatican Council says miracles can be used to prove the divine origin of Christianity. Let's define the term first.

The definition of a miracle. According to theologian Parente, the word miracle comes from the Latin word miror---I wonder. In the broad sense, it is an extraordinary event which calls attention and excites wonder. Theologians explain it is: (a) done by God as principle cause; (b) done in the world; (c) in a way superior to all forces of nature; and outside or above, but not in violation of the laws of nature, but by an exceptional happening brought about by a divine power that intervenes in created things, producing an effect superior to their natural power. The possibility of the miracle rests chiefly on the absolute dominion of God as the First and Free Cause of the Universe, Whose laws are subordinate to Him and cannot limit either His freedom of action or His power. Only the logically impossible and that which violates His Nature (sin) are impossible to Him. (See Dictionary of Dogmatic Theology, The Bruce Publishing Company, [1951], pg. 188).

Those of your unbelieving family members, co-workers, neighbors, friends, etc, are really saying one of three things when they deny the miraculous.

1. They claim to know with certainty that miracles cannot happen.
How do they know miracles are impossible? They must assume the non-existence of God first, or that God would not/has not performed a miracle. If they expressly or implicitly deny the existence of God, that shifts the ground of the debate. Their problem is not about miracles. If they claim God has not or would not perform a miracle, how do they know the Mind of God? What is their source of this alleged knowledge?

2. Science disproves the existence of miracles.
Science is confined to the observation of natural phenomena. You cannot replicate something that is unique, like a miracle. Scientists believe in the Big Bang, yet that can't be replicated. I believe my mother loved me, but I have no scientific proof, nor is any possible. Must I conclude she didn't love me? Science is but one way to knowledge. Ask them, "Do you believe that water freezes at 0 degrees Celsius at sea level?"  They will respond "yes" because it can be proven. Not so fast. All you can prove is that all water that you have seen in the past or at present has frozen (or is freezing) at 0 degrees Celsius at sea level. You assume that the future will be a constant repetition of the past--that it will always continue to do so. But how do they know this? Ironically, they take it on belief!

3. Miracles were just ways superstitious people explained things they didn't understand.
Similar to #2, they accuse Christians of making a "god-of-the gaps" to explain gaps in knowledge. When we don't understand something, we ascribe it to the action of God. However, they assume that everything has a natural explanation which cannot entail the supernatural; a "science-of the gaps." They do not follow the evidence where it leads, only seeing where they want to go, and not really looking for the truth.

Conclusion
Miracles can and do happen. The Modernists, atheists, and agnostics have denied any possibility of the supernatural based on assumptions, not evidence. A short post can never do justice to the great and many proofs for, e.g., the Resurrection of Jesus Christ from the dead. However, it is shown that miracles can happen, and they can prove the truth of Christ's Church. If God exists, He can perform miracles. These miracles can be proofs of faith, such as the Miracle of the Sun at Fatima witnessed by over 100,000 people. The greatest miracle is the Resurrection of Our Lord, proving He was God and He founded the One True Church.

The modern minds claim to know everything, but as the Bible tells us, "Professing themselves to be wise, they became fools,..." (Romans 1:22).

Posted by Introibo Ad Altare Dei at 12:06 AM