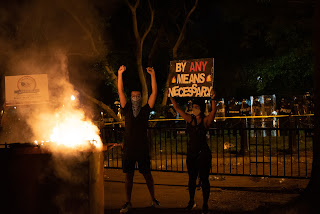 New York City has been described by many adjectives. Boring is not one of them. A lifelong New Yorker, I was in the "hot spot" of the COVID-19 epidemic which nearly claimed the life of my best friend (now fully recovered, Deo gratias) and still keeps me confined, as if under house arrest, while working at home the best I can. Now, I'm in the midst of riots, more scary than the virus, instigated by the brutal death of George Floyd in Minneapolis. Floyd, an African-American, was restrained by a white police officer, Derek Chauvin, who knelt on his neck for almost nine minutes while Floyd was crying out that he couldn't breathe. The three attending police officers did nothing to stop Chauvin. Floyd was pronounced dead and Chauvin faces charges of second degree murder and second degree manslaughter. The attending officers also face charges.

Protests and rioting have since broken out all around the country. Unfortunately, most were not peaceful, constitutionally protected protests. Most were violent riots resulting in looting and deaths of innocents. As this wave of rioting continues, a few preliminary remarks are in order. By all indications, Chauvin was wrong, yet he did not have his day in court. The presumption of innocence (introduced as a legal concept by my Patron Saint, King St. Louis IX), applies to Chauvin just as much as it did to O.J. Simpson. We have no legal right to call him a "murderer" until he either (a) pleads guilty, or (b) is found guilty by a jury of his peers. All the facts are not before us and the jury is still out (literally) on whether or not he committed murder. Floyd was not detained "just because"---he was accused of passing counterfeit money. Second, all of those "protesters" committing illegal, immoral acts such as looting, arson, and assault/murder, are just thugs.   A totally peaceful protest is fine, whether or not you agree with the cause, but acts that are illegal/immoral are not protests, but an excuse for lawlessness and to intimidate. They hurt a cause, and never help it.

While watching one such act of senseless rioting, there was a sign one person held with the motto, "No Justice, No Peace." It then occurred to me that these thugs have no idea (or choose to willfully ignore) what the law, justice, and peace really mean. In the wake of the Great Apostasy, the true meaning of those words have been either obscured or given new and false meanings. All the Vatican II sect clergy talk about the need for "social justice," which almost always means pandering to sodomites and illegal aliens who take away much needed resources from U.S. citizens while they commit crime. "Peace," to them, means pacifism in the midst of dangers we must fight. In this post, I will lay out the teaching of the Church on what law, justice, and peace really mean.

(I credit the work of theologian Cahill, The Framework of a Christian State [1932], and theologian Civardi, Christianity and Social Justice [1961] from which I composed the rest of this post; except where attribution is specifically given to another theologian.---Introibo).


Church Teaching on the Law and Civil Authority
Moral Law
The moral law may be defined as the norm of human conduct promulgated by a legitimate authority for the common good. It is then subdivided into:
Civil law has its foundation, its source, and its binding force in the Natural Law. It is not without reason the Book of Proverbs states, "By Me, kings reign, and lawgivers decree just things; by Me, princes rule and the mighty decree justice." (Proverbs 8:15-16). Civil Law also has its sanction and its limitation in the Natural Law. The lawgiver cannot decree anything contrary to it. When a civil law contradicts the Natural Law, the Angelic Doctor, the great St Thomas Aquinas informs us that it is not a true law, but a corruption of law. It is not binding in conscience, and a person may disobey, e.g., a law that would have them participate or sanction the killing of innocent unborn babies by abortion. Do people have a right to rebel and overthrow the government? That question will be answered later in this post.


Church Teaching on Justice
Justice is the cardinal virtue that prompts us to give everyone his due. There are three kinds of justice, each named after its objective.
Notice how, when properly understood, justice is in no way offended by opposing sodomite "marriage," or wanting illegal aliens deported. Sodomites violate the Natural Law as to the proper ends of sexuality and family. No government is bound in justice to give benefits to people who violate the very laws promulgated to regulate entry.

Church Teaching on Peace
There is an inward peace that reigns among the faculties of people, whereby the lower are subject to the higher; and there is an outward peace that reflects the relations between humans as individuals, between classes, and between different nations. There are three principles that guide Church teaching regarding outward peace:

The Duties to (and limits of) Governmental Authority
Our Lord Jesus Christ taught by His Divine example:
The Conditions When Revolt Can Be Permitted
People have a right to defend themselves against a tyrannical government that goes against God's law. However, to resist the government is always an extreme measure, and therefore it can only be resorted to in extreme cases and under certain well-defined conditions of Natural Law. The most terse and eloquent exposition of the four (4) requirements when open opposition to the government is permitted was penned by theologian Rickaby in the Dublin Review, April 1865 on resisting tyrannical government; De Regimine Principium..

The Facts and  The Teachings of the Church as Applied to the Instant Case
Conclusion
The sign "No Justice, No Peace" was clearly a threat held up by the rioter I saw. It translates as, "If you don't do what we want ("justice") you will have rioting that you can't control (no "peace"). The truth is that these rioters don't know justice, so they will never know true peace. That peace can only be had by true justice. You need to follow Him Who is rightfully called the Prince of Peace, and His One True Church. As the Bible tells us, "Opus justitiae pax"---"The work of justice shall be peace." (Isaiah 32:17).
Posted by Introibo Ad Altare Dei at 12:10 AM