Getting Back To Basics 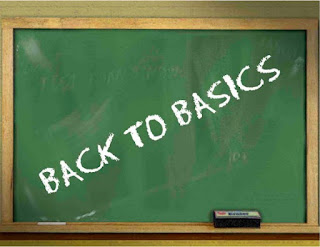 With all the fuss over John Salza and Robert Siscoe's  latest attack on sedevacantism, an article came to my attention written by another "recognize and resist" (aka "R&R") author---Atila S. Guimarares from the website traditioninaction.org. Entitled Looking At Some Basics of Sede-Vacantism, the former NYC teacher in me was reminded of a truism: If you get the basics of any discipline wrong, you can't expect to get anything else correct about it. If a student can't understand addition and subtraction, don't expect them to learn multiplication and division. Mr. Guimarares, like Siscoe and Salza, begins with false theological premises from which no sound, valid conclusions can ever be drawn. I would like to draw my reader's attention to the incorrect principles of Mr. Guimarares' article, to see how those of the R&R camp either (a) purposely distort or (b) can't (won't) understand the "basics" of the sedevacantist position. To attempt to go through all that was wrong with this article would require several posts, so I'll limit myself to his most egregious errors. Under each heading below, the article will be in red print and my comment below.


False Principle #1: A Heretic CAN Be Pope

"...since a scholar knows that any heretic, upon falling into heresy, disconnects himself from the Church, he is led to apply this to the conciliar Popes and to draw juridical consequences from this fact: The present day Popes are no longer Popes, they lose their jurisdiction, their sacraments are not valid, the Bishops consecrated by them are not Bishops, the priests are not priests, etc."

I know of not one theologian who teaches (nor of any sedevacantist who states) that heresy renders sacraments using the Traditional Catholic Rite invalid. It is a dogma of the Faith that the Sacraments work ex opere operato ("from the work wrought") and independent of the cleric's moral worthiness, including the sin of heresy. If what Guimarares thinks was correct, how could he explain the fact that the Eastern heretics who deny the Immaculate Conception, the Infallibility of the pope, etc., have always been in possession of valid sacraments according to the Church?

"I have accompanied these studies from afar, and I also know that a heretic cannot be a member of the Church. When I apply this principle to the conciliar Popes, however, I stop at the affirmation that they are heretics. I do not enter into the juridical consequences of this fact. The imperative reason is simple: Pope Boniface VIII in the Bull Unam Sanctam clearly interpreted the words of Scripture, 'The spiritual man judges all things and he himself is judged by no man' (1 Cor 2:15), as applicable to Popes. And he concluded saying definitively that no one can 'judge'  a Pope. 'To judge,' for Boniface VIII, was not to make a dogmatic or moral appraisal about the thinking or the conduct of a Pope, but rather to attribute to oneself the power of deposing him. Boniface VIII was indirectly dealing with the case of the King of France, Philip the Fair, who pretended he could depose and make Popes."

A famous R&R "boogeyman": Sedevacantism "judges" the pope. As a procedural matter he is correct, "The First See is judged by no one" as Canon 1556 of the 1917 Code clearly states. As explained by canonist Cappello, "Immunity of the Roman Pontiff. 'The First See is judged by no one.' (Canon 1556). This concerns the Apostolic See or the Roman Pontiff who by the divine law itself enjoys full and absolute immunity." (See Summa Juris Canonici 3:19.) However, a pope who becomes a manifest heretic loses his office by DIVINE LAW, and an apostate, like Bergoglio, cannot attain the office. This is the teaching of all pre-Vatican II canonists and theologians. (To name but a few, Van Noort, Coronata, Dorsch, Iragui, Prümmer, Regatillo, Salaverri, and Zubizarreta).  "We" depose no one.

"Now, when someone affirms today that the conciliar Popes are not Popes, that person implicitly is attributing to himself that power. Even when, to avoid such arrogance, a person says that the Pope automatically ceases to be Pope and therefore the See is vacant, it seems to me that he does not have the right to conclude 'therefore the seat is vacant' because here he directly enters the prohibited zone."

Once more, I know of not one Church authority that discusses "the prohibited zone." The import is clear: We can judge the pope a heretic, but we can't draw the logical implication from that fact. Put another way, in American law today (tragically) abortion is not considered either murder or a crime. Does that mean we cannot judge a doctor who performs an abortion as a murderer? Major premise: Performing an abortion is murder. Minor premise: Dr. X performed an abortion. Conclusion: Dr. X is a murderer. The R&R camp's major premise: A heretic cannot be a member of the Church. Minor premise: The "concilliar popes" are heretics. Conclusion: The concilliar "popes" are members (and visible head) of the Church! Talk about skewed "logic."

False Principle #2: You Can "Resist" A Pope Like St. Paul

"St. Paul told us not to accept a different Gospel, even should it be presented by an Angel from Heaven. Consistent with such teaching, he resisted St. Peter when the latter scandalized the faithful. Such precedent teaches us that we can judge whoever is not in accordance with the Gospel, even if it is a high authority, a representative of Heaven. Thus, we can denounce and resist a Pope when he scandalizes the faithful. However, neither St. Paul nor any other Apostle declared the See to be vacant. We find no example of this in Scriptures."

Sheer ignorance. The only pope discussed in the Bible is St. Peter, so we are dealing with a limited number of historical examples, to say the least. The fraternal correction of St. Peter by St. Paul is recorded in Galatians 2:11-14. According to theologian Suarez: "I therefore respond to the objection that fraternal correction to the Supreme Pontiff is fitting, insofar as it is a duty of charity, and as such it is proven that this may take place as someone greater by someone lesser, and as a Prelate is corrected by his subject, as Paul acted towards Peter… Thus the Pontiff may be respectfully corrected and admonished, first alone, if his crime be secret, and then before a few others, if the matter and necessity require it. But what follows,'tell the church,'has no place here, because the term 'Church' means not the body of the Church, but [an offender’s] Prelate.… Because the pope has no superior Prelate, such a denunciation has no place in his case. Rather since he himself is the Pastor of the whole Church, the Church is sufficiently 'told' of his sin when it is told to the Pope himself." (See De Immunitate Ecclesiastica 4:6.12; Emphasis mine). The whole idea that you can "denounce and resist" a pope (in matters of Faith, morals, or universal disciplinary laws) is unsupported. No one declared the See of St. Peter vacant because he was not a heretic. One CAN legitimately refuse a personal order of the pope to do something immoral (e.g., go kill one of my enemies, etc.)

"In accordance with the laws of visible societies, the conciliar Popes were chosen by a designated electoral body, the College of Cardinal; they were accepted by the ensemble of the Catholic Hierarchy and by the ensemble of the faithful and were recognized as valid Popes by the whole world. One could say, therefore, that these Popes are de facto Popes. Are they also de iure Popes? Just as a temporal ruler acknowledged by all as such has the power of jurisdiction of his office, so also does a conciliar Pope. Therefore, I would say that despite the heresy, they retain the right to command in everything that is not directly heresy."

The sedeprivationists also hold the See of Peter is vacant, but not in the same way as your sedevacantist. Francis would be a "material pope" only; a placeholder for the day when he (or his material successor) publicly abjures his heresy, condemns Vatican II, obtains valid orders, and then becomes formal pope. A material pope has no authority and is not to be obeyed. In the R&R world, a pope can be pope-in-fact, but not pope-in-law (whatever those terms mean), and YOU get to decide what to obey and what to reject as "direct heresy."

"When does a bad Pope stop being Pope? ... In the same way that a bad King stops being de facto King. And when does this happen? When a considerable part of his subjects denies him obedience. In the case of the conciliar Popes, when Catholics become convinced that these Popes are heretics, resist their orders and spread the position of resistance until the government of such Popes becomes unsustainable. It seems to me that this condition of great public notoriety is what some theologians were referring to when they said that the heretic Pope would continue to be Pope until his heresy became 'notorious and publicly known.' "

Nobody in the R&R camp seems to be able to do the simple research for what makes heresy "notorious." Here, Guimaraes thinks it means some sort of "popular uprising" against a hated ruler. Once enough people join Siscoe, Salza, Bp. Williamson, the Society of St. Pius X, etc, then the pope-in-fact will no longer be pope-in-law. Any second year seminarian from pre-Vatican II days would be able to tell you that "notorious" is understood by the theologians and canonists as meaning "manifest." The pope's heresy must be public for him to lose his authority by Divine Law. A pope who is an "occult" (i.e., "secret") heretic remains as pope. According to canonist Michels, an heretical statement becomes "manifest" or "notorious" when it "is established through authentic public documents… because such documents of their nature are open to inspection by many people, and therefore necessarily bring with them public notice." (See  De Delictis et Poenis, 1:140) Virtually every decree published in the Acta Apostolicae Sedis (the official digest for all documents of the Holy See) by the post-Vatican II "popes" would qualify as notorious heresy!


Conclusion: What You Don't Know CAN Hurt You

The false principles of the R&R camp (a heretic can be pope, we can resist a pope by picking and choosing what we think is correct, strange and unsupported notions about the nature of the papacy, and misunderstandings of theological and canonical concepts) all exist in one kind or another throughout the movement. By failing (or refusing) to understand the true principles that ground sedevacantism, and using false principles to assert their position of "recognize and resist" the "pope," Siscoe, Salza, Guimaraes, and the others are keeping people in union with the Argentinian apostate and his evil sect. How can they "look at the basics of sedevacantism" when they don't even have a clue as to what they are and how they apply to the instant case? Remember the sobering words of the prophet Hosea, "My people are destroyed for lack of knowledge: because thou hast rejected knowledge, I will also reject thee, that thou shalt be no priest to me: seeing thou hast forgotten the law of thy God, I will also forget thy children." (Hosea 4:6).

Posted by Introibo Ad Altare Dei at 2:55 AM